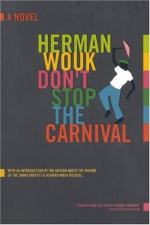 Herman Wouk
This Study Guide consists of approximately 54 pages of chapter summaries, quotes, character analysis, themes, and more - everything you need to sharpen your knowledge of Don't Stop the Carnival.

This detailed literature summary also contains Topics for Discussion and a Free Quiz on Don't Stop the Carnival by Herman Wouk.

After suffering a heart attack, Broadway publicity agent Norman Paperman flees the high-stress, urban life for what he believes will be the quiet, soothing Caribbean. With his millionaire tycoon friend Lester Atlas, Paperman files to the fictional island of Amerigo to investigate a resort hotel that's for sale. Atlas, in his cigar-chomping, guffawing manner, shows his friendship by offering to help Paperman acquire a property in the West Indies that will provide a nice, peaceful life for the harried press agent and his wife, Henny. Loud and boastful, Atlas is especially proud to be mentioned in a recent Time magazine, although the portrait is one of a manipulative, cutthroat businessman who provokes corporate in-fighting and scandal. Lester Atlas also has visions of investing in Caribbean real estate himself, hoping to cash in on what he sees as a trend, and wants the Papermans to scout potential properties for him.

What happens next is a comedy of terrors, as practically everything Paperman touches turns to trouble. On his first day at the Gull Reef Club, Paperman nearly drowns while scuba diving but is pulled shore by a Navy frogman named Bob Cohn. At a party later that night at the club, Paperman meets Iris Tramm, a former movie actress and resident of the club. There is an instant attraction between them, although the beautiful widow is elusive. Paperman's wife is still in New York, although the reader learns that the press agent had a vigorous second career as an admirer and sometimes seducer of showgirls before his heart attack. Paperman meets Amerigo Governor Sanders and his wife at the party, then later walks Iris to her cabin and realizes she's the former movie actress, Janet West. Within just a few days of negotiating the purchase, Paperman learns that guests are threatening to leave because of electrical problems at the Gull Reef Club and that a water shortage is about to shut down the entire plumbing system.

A condition of Lester Atlas arranging financing for the resort purchase is that Paperman remodel the facility and add more guest rooms so the increased income will enable him to retire the loan and then afford him and his wife a comfortable retirement income. As he sets about the business of fixing up the club, some tragic-comic scenes ensue when the transplanted New Yorker gradually realizes that competent tradesmen are scarcer than snowflakes on the island, and that practically every other day is a holiday. Just as his remodeling project gets started, his right hand manager takes offense at something Paperman either did or didn't do and quits. As he desperately tries to find a replacement, the water reserves run out and Paperman must purchase several truckloads of water from a barge to refill the cistern. There is the briefest of respites while the resort returns to "normal" and Paperman (known to his native employees as "Mistuh Papuh") can untangle his overwrought nerves.

During another party at Gull Reef Club for his guests, Paperman relaxes and sips drinks with friends as they watch thunderclouds gather in the darkening skies. Paperman becomes elated at the prospect that rains might do for his water reserves what water trucks could not—fill the reservoir for free. Jubilant, they watch the storm as it condenses over the town several miles away, thunders and starts to rain everywhere but at the Gull Reef Club. Paperman hires a college-age, bearded young man named Church Wagner as bartender. He is an excellent bartender and very responsible toward his job and the club. However, one day there is a scene when Church is caught having sex with one of the cleaning maids in an empty guest room. Then, several of the maids come down with gonorrhea and quit, leaving Paperman to clean rooms as well as run the resort. His friend, Iris Tramm, offers to help: she works gratis in the office because she's bored and wants something to do.

With the cistern partially filled with a few days' supply of water, a stiff earthquake rolls through the islands and shatters the cistern sending costly drinking water shooting out in a stream. Desperate, Paperman jokes that the water at Gull Reef Club is more expensive than the wine. Meanwhile, he must do something about a gigantic hole in the clubhouse left by local workers before they walked off the job. Some loyal employees suggest that he contact Hippolyte, who knows the Gull Reef Club like the back of his hand and is a great worker except that he is "fonny." After an exhaustive search, he finds Hippolyte and hires him to repair the cistern, the electric water pump, the hole in the clubhouse and more. An enigmatic figure who always carries a machete, the Calypso-speaking Frenchman Hippolyte Lamartine and his crew get right to work and have everything humming in short order. Paperman leans that the natives call Hippolyte "fonny" because he was sent to a mental institution on one of the other island for chopping off a policeman's head with his machete. It is unclear whether Hippolyte has been discharged or escaped from that facility.

At the alcoholic conclusion of another wild day, Paperman escorts Iris back to her bungalow and they at last make love. Paperman is giddy with delight until he soon learns that Iris is the long-term mistress of the governor, and his mood darkens once again. Lester Atlas and Henny Paperman arrive from New York City at practically the same time. As Norman Paperman tries to sort out his domestic and business troubles, he leaves Atlas ("Mistuh Ot-loss") temporarily in charge of the club and finds out later, much to his horror, that Atlas has fired Hippolyte because he finds him a disturbing presence. Paperman puts out the word among his staff to alert him if they should see any sign of Hippolyte roaming the grounds with his machete.

Coming off a major bender, Iris Tramm jumps in her car and speeds into town to look for her dog that has disappeared. She slams her car into two vehicles stopped in the middle of the road and, as natives socialize in the street, is rushed to the hospital and dies. Henny and Norman Paperman finally realize that the Caribbean is probably not the place for a pair of expatriate New Yorkers. They arrange to sell the Gull Reef Club When the deal goes through and they are ready to return to New York, Paperman admits to his long-suffering wife that he had an affair with Iris, which she already suspected. Tolerance, if not love and forgiveness, enable them to face the prospect of resuming their lives together in New York.

More summaries and resources for teaching or studying Don't Stop the Carnival.