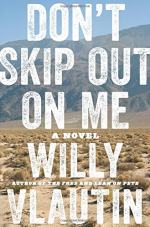 Don't Skip Out on Me Summary & Study Guide

Willy Vlautin
This Study Guide consists of approximately 34 pages of chapter summaries, quotes, character analysis, themes, and more - everything you need to sharpen your knowledge of Don't Skip Out on Me.

Don't Skip Out on Me Summary & Study Guide Description

Don't Skip Out on Me Summary & Study Guide includes comprehensive information and analysis to help you understand the book. This study guide contains the following sections:

This detailed literature summary also contains Quotes and a Free Quiz on Don't Skip Out on Me by Willy Vlautin.

The following version of this book was used to create this study guide: Vlautin, Willy. Don't Skip Out on Me. New York: HarperCollins, 2018.

The novel takes place in the present day and opens in the town of Tonopah, Nevada. Horace Hopper is in his early twenties, and he lives and works on a sheep ranch. He is half-Irish and half-Native American. He was raised for much of his life by his grandmother, as his parents did not want to take care of him. For the last several years, he has lived and worked on this ranch, and he and the owners—Mr. and Mrs. Reese—now view each other as family.

However, Horace aspires to be a professional boxer, so he goes to Tucson, Arizona to join a training gym there. Meanwhile, Mr. Reese takes on almost all of the ranch work by himself, despite the fact that he is of advanced age and has back problems. Mr. Reese does not want to retire. In Tucson, Horace trains with a former professional boxer named Alberto Ruiz. Horace adopts the name Hector Hidalgo, as he admires many successful Mexican boxers. He wants people to believe that he is a Mexican boxer, and due to his half-Native heritage, people often mistake him for Mexican.

Horace boxes in some in-state and out-of-state tournaments, with mostly good results. However, after winning his first professional bout, he discovers that his trainer, Ruiz, swindled him out of the prize money. Horace continues to train and occasionally compete in matches. Some of his matches are in Mexico. However, he becomes quite lonely in Tucson. He begins dating a young woman, but she becomes pregnant by another man and feels obligated to marry him.

One day, Horace accepts a match against a far more skilled opponent. Horace performs well and almost wins. Unfortunately, he sustains severe injuries and permanently loses sight in one eye. These injuries force him to give up boxing, and he is devastated. He lives and works in Las Vegas for a short period of time, and he eventually returns to Tonopah to live and work with the Reese’s again. Mr. Reese has sold the sheep ranch and has purchased a smaller, more manageable cattle ranch.

More summaries and resources for teaching or studying Don't Skip Out on Me.

Don't Skip Out on Me from BookRags. (c)2022 BookRags, Inc. All rights reserved.