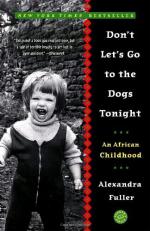 In School, Vanessa goes away to boarding school when Bobo is four. Bobo gets packets from the correspondence school in Salisbury. Each morning she does her lessons at the tiny blue desk and chair on the veranda, next to Dad's desk.

When Bobo is eight, she is sent to boarding school, where she will be called Alexandra. The white-only school has one hundredacres of grounds including tennis courts, rugby field, track, roller rink, and swimming pool. They have dozens of white teachers for music, art, sewing, woodwork, and coaches for every sport.

In Independence, everyone is shocked when they lose the war. In March 1978, Bishop Abel Tendekay Muzorewa of the African National Council forms an interim government of the country now called Zimbabwe-Rhodesia. Fighting immediately breaks out between tribal factions and black political groups. After six months, Muzorewa gives...