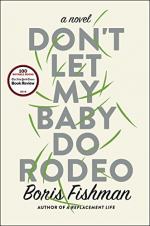 Boris Fishman
This Study Guide consists of approximately 51 pages of chapter summaries, quotes, character analysis, themes, and more - everything you need to sharpen your knowledge of Don't Let My Baby Do Rodeo.

This detailed literature summary also contains Quotes and a Free Quiz on Don't Let My Baby Do Rodeo by Boris Fishman.

The following version of this book was used to create this study guide: Fishman, Boris. Don’t Let My Baby Do Rodeo. HarperCollins, 2016. Kindle Edition.

As the novel begins, it is 2012 and time for children to come home from school. Maya Rubin goes to the school bus stop to meet her adopted son, Max, but discovers that instead of taking that bus, he has taken a city bus which goes towards the New York State line. In a state of panic, Maya starts making phone calls, including ones to the school and the police, to try and find Max before calling her husband, Alex. She finally calls him and he comes home, brining his mother Raisa and his father, Eugene, with him.

While they wait for news about Max’s whereabouts, the family discusses disturbing elements of Max’s recent behavior. In addition to the current event, he sleeps on the floor and eats grass. Eugene attributes Max’s behavior to his genes. He comments that it is impossible for them to know what they are dealing with because Max is adopted and they do not know anything about his biological family.

In the midst of all of the discussion, Maya decides that she wants to take the same bus route that Max took earlier in the day. Alex drives her to the bus terminal and as the bus takes off with Maya on it, he gets a call from home saying that Max is back. A woman found him by a lake with his head under the water. Max says he was counting pebbles. No one can tell Maya, though, because she left her cell phone at the house. During the bus ride, Maya gains the sympathy of the bus driver, even though he thinks that she is crazy. When they get back to the terminal, he lets her use his cell phone and she learns about Max’s return. Eugene comes to pick her up.

After the family chides Maya for not being reachable and she chides them for not contacting the bus terminal to relay the message to her, Max goes to bed and the family takes turns questioning him to find out why he did what he did and explaining why he should not do it again. No one gets a real answer out of him, though. Maya thinks that he needs to see a psychiatrist. Alex thinks that he is just a boy being a boy, but finally everyone agrees that if he is going to see an psychiatrist, it would be okay to see a family friend, Bender. They take Max to see Bender and after the appointment is over, he tells them that Max is adapting to his adopted world, but is still having difficulties doing so.

Maya is not satisfied after the session, but knows that she cannot take Max to the specialist she would like him to see, so she decides to take him to a healer. When she does, though, the healer treats her, not Max. Later that evening, Alex, Maya, Bender and his wife observe Max performing a ritual to keep the deer away from the pine tress. While he does it, the deer surround him, but do not harm him until Alex intervenes and scares them. After that, Alex looks for information about Max in his records and, when he cannot find anything, Maya suggests that they find Max’s biological parents, Tim and Laurel, and go and talk to them personally to see whether they can provide an explanation for Max’s behavior.

As Alex and Maya do not have Laurel’s and Tim’s address (it was a closed adoption), they go to their old adoption caseworker for help. He is of no help, but then Alex realizes that he has a vague memory of the couples’ license tag as, even though it was a closed adoption, they had come in person to deliver Max when he was a baby. A search for the license tag number does not give them a phone number, but they do get an address. Taking Max with them, they go to Montana to look for his birth parents. They tell Max that they are going on vacation as he does not know that he is adopted.

Once there, they find the man who now owns the car, but the only thing he knows about Tim and Laurel is that they got a windfall, bought a nice new car, and left.

During the trip, though, Maya meets a man, Marion, at a diner who shows up at the various places where the family stays. They talk, share information about their lives and she imagines having sex with him before they finally do. When she does have sex with him, she does so in his hotel room after leaving Alex and Max at their hotel and spending the night with him. Afterwards, he tells her that she can stay. She tells him that she loves him, but that she cannot stay.

Marion goes back to her hotel with her and Alex sees them together. He already knows that Maya finds Marion attractive and there are signs that he has been crying. He argues with her when she comes to the room and she points out that she came back. They leave to go back home.

The whether conditions are deteriorating as they leave to drive back to New Jersey. Even so, Maya wants to stop at a rodeo. She goes in with Max, but he does not like it. She chooses this moment to tell Max that he is adopted. Max takes the news badly. When they get on the road again, the conditions are so bad that it will take hours for them to reach the highway, something that should have taken much less time in good weather. They take a detour, but it is not any better. Finally Maya cuts off the engine and gets out of the car. She realizes that things may look bad, but with work, they can make it out of the situation. She beckons Max and Alex out of the car so that they can get the same message.

More summaries and resources for teaching or studying Don't Let My Baby Do Rodeo.