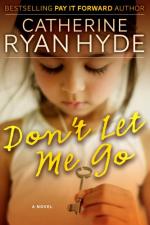 Related Topics
Take Me With You
Stay

Catherine Ryan Hyde
This Study Guide consists of approximately 32 pages of chapter summaries, quotes, character analysis, themes, and more - everything you need to sharpen your knowledge of Don't Let Me Go.

Billy explains his bad luck to Jesse. He also believes he cannot go to Grace’s dance performance. Jesse says Billy must go. Billy explains that this is why he refused for so long to let people in –because they come to depend on you. Billy is also worried about appearing in public looking so ugly. Jesse offers him the use of sunglasses and a hat. Jesse says that friends don’t just depend on you. You can depend on them. Grace visits Billy over the weekend several times to see how he is doing.

On Monday, Jesse brings some natural, non-drug, herbal pills to Billy so he can take them. They are Valerian root and Kava Kava. Jesse also brings concealer, to help with Billy’s face. That night, Rayleen, Jesse, Billy, Felipe, and Mrs. Hinman all go to Grace’s...

More summaries and resources for teaching or studying Don't Let Me Go.