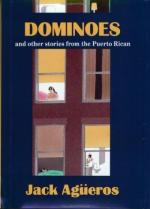 Double Six: The Box of Teeth

"Dominoes" begins with a game of dominoes between four Puerto Rican men on a sidewalk in New York City. Ebarito and Wilson make up one pair of players and Paco and Tito the other. Paco leads with a double six, and Ebarito is irritated that he must pass because he does not have a six in his hand. When he finds he must pass a second time, he becomes even more disgruntled. He feels that Paco has the luck and the skill that enable him always to win. Ebarito has been given a handicap of one hundred points, but even that is not enough. It is clear that Ebarito is the odd man out in this group.

Paco's young niece Alma leans on the ledge of her second floor window, watching what is going on in the street. Her uncle...