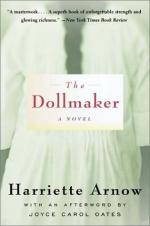 These four chapters develop and bring to a climax the novel's first core conflict, that of Gertie's and Clovis' visions of a better future for their family.

Chapter 6 - As Gertie and Cassie go to the post office and grocery store in town to see if there is any mail, narration reveals that it has been a week since Clovis' departure and that Gertie has had no word from him. When she arrives at the store, the storekeeper tells them the mail is going to be late. Gertie and Cassie chat with Clovis' mother, who reassures Gertie that Clovis is all right and then returns home to take care of her husband, taking Cassie with her.

As other women of the township gather to wait for the mail, Gertie becomes restless and sets to digging the shopkeeper's potatoes. As she digs...

The Dollmaker from BookRags. (c)2023 BookRags, Inc. All rights reserved.