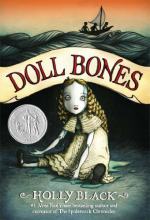 Holly Black
This Study Guide consists of approximately 64 pages of chapter summaries, quotes, character analysis, themes, and more - everything you need to sharpen your knowledge of Doll Bones.

Doll Bones by Holly Black is a novel that follows three children from imagination to puberty and back again. Zach, Alice and Poppy have been friends for years. They go to the same school, and spend a great deal of time together, most of it lost in their imaginations. Playing an ongoing game of make-believe, the three friends have created an entire world of fiction in which they serve an old porcelain doll they call the Queen who is confined in a cabinet in Poppy's house along with other things that Poppy has been forbidden to touch. Her mother had first found the Queen at a tag sale and was convinced she would be worth a great deal one day. Somehow, the doll seemed to watch everyone and everything in such a creepy manner that Poppy's sister was afraid of her. None of them can remember when they decided to make her the Great Queen, but since then, they'd served at her pleasure in 'the game'.

Playing almost daily, they'd created a legend in which the Queen ruled from her glass tower, able to affect those who disobeyed her, causing bad fortune, illness and even incarceration. The game is a form of escapism that allows each of them to develop parts of their personality that would otherwise not exist. Each of the three friends faces issues at home that are complicated and use the game to allow their personalities to explore possibilities.

When Zach's father returns to his mother after a three year separation, he decides that Zach is too old for make-believe and while Zach is at school, he throws out all of the action figures they used in the game with the exception of the few that Alice and Poppy had in their possession. Unable to reveal the depth of his loss to them, Zach tells them he no longer wants to play. Unhappy and unable to understand, Poppy decides that Zach needs a real quest to put him back on track.

What follows is an adventure that takes them to East Liverpool in the neighboring state of Ohio. They are on a quest to take the Queen, who Poppy learned was made from the bones of a small girl named Eleanor Kerchner, back to her family's grave site where she will finally be able to rest in peace. The quest will test their friendships, and their beliefs in what is real and what is merely imagination; blurring the lines between fantasy and reality until none of the three friends are sure which is which.

More summaries and resources for teaching or studying Doll Bones.