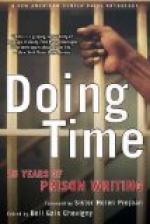 Plot Summary
+Chapters Summary and Analysis
Foreward, Introduction, Initiations, and Time and Its Terms
Routines and Ruptures, Work, and Reading and Writing
Players and Games and Race, Chance, Change
Family and The World
Getting Out and Death Row
About the Authors and Afterword: More about the Authors, What the Lives and Deaths of People in Prison Tell Us
Characters
Objects/Places
Themes
Style
Quotes
Topics for Discussion
Order our Doing Time: 25 Years of Prison Writing-a PEN American Center Prize Anthology Study Guide

The contests enabled the prisoners to express themselves in creative ways. Some were inexperienced writers. Others were used to writers' workshops and were able to polish their writing skills, especially with mentoring. Self-expression was seen as a therapeutic step. The contest provided a listening audience. The PEN website (www.pen.org/prisonwriting) published selections from the current year's contest, along with interviews from previous year's contests.

The writers varied in their subjects and themes, such as freedom, remorse, self-pity, denial, and hope. Some of the writing was serious with violence, humiliation, and sexual tension exposed. For example, "Chronicling Sing Sing Prison," "Coming into Language," and "Death of a Duke" all contained tragic information on the prisons and what occurred there. In "Ignorance Is No Excuse for the Law" written by Alejo Dao'ud Rodriguez, one inmate listened to another on death row telling him heartbreaking and distressing stories from his childhood. The inmate's father had abused him physically, verbally, and sexually.

On the other hand, some showed a sense of humor, like "Dog Star Desperado" and "Black Flag to the Rescue." Hope could be seen in Judith Clark's poem "To Vladimir Mayakovsky" about choosing life, her offspring, poems, and dreams over death, despite all of her hardships. Robert M. Rutan's short story "The Break" ironically told of an old convict painfully climbing the prison wall to reach his cellblock, a place where he felt comfortable and free even though it was prison.

One of the writings was unsettling, disturbing, and based on historical events. Jon Schillaci wrote the poem "For Sam Manzie" who at the age of 15, raped and murdered 11-year-old Eddie Warner. Warner had been out selling candy for his school's fundraiser. The crimes were complicated by Manzie's past of being sexually involved with 43-year-old convicted pedophile Stephen Simmons. Manzie had met Simmons over the Internet.

Prisons were not always safe. There were many problems and riots involving racial tension and conflicts with administration. Racial and moral conflicts occurred in "Lee's Time" by Susan Rosenberg. Paul Mulryan's story called "Eleven Days Under Siege: An Insider's Account of the Lucasville Riot" told about how the news falsely called the siege a racial war when it really was a war against the management. In prisons, inmates faced difficulties in their relationships with each other. Charles P. Norman's short story called "Pearl Got Stabbed!" dealt with an inmate who got jealous over his boyfriend's wanderings. Kilgore plotted and killed his lover Pearl because Pearl strayed.

The prisoners longed for relationships with their families. Judee Norton became despondent in "Norton #59900" upon hearing that her son could not visit her in the prison anymore. She had to put on a tough exterior, while inside she was fearful and disappointed. Anthony La Barca Falcone dreamed of a normal relationship with his estranged daughter in "A Stranger." Kathy Boudin yearned to be in the car with her son as he traveled west from Davenport, Iowa to California. Her almost 18-year-old son was starting a new adventure in his life.