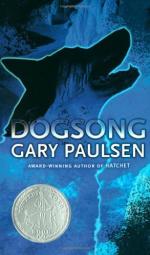 Gary Paulsen
This Study Guide consists of approximately 31 pages of chapter summaries, quotes, character analysis, themes, and more - everything you need to sharpen your knowledge of Dogsong.

Mukluks are boots made of fur and animal hide.

Snowmachine is another name for a snowmobile.

Caribou are also known as reindeer. Caribou are most often found in cold northern locations.

Tundra is an area identified by its permanently frozen soil and its treeless appearance.

A shaman is a holy person, revered by indigenous tribes. A shaman is most often an elderly man or woman who is familiar with a tribe's history and traditions.

A parka is a heavy jacket with a hood. Parkas are often made from fur or animal skin.

A mammoth is an extinct animal which closely resembles an elephant.

Below world is another term for hell.

A hummock is a small, rounded hill.

A toboggan is a kind of sled.

More summaries and resources for teaching or studying Dogsong.