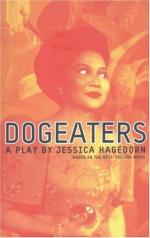 This detailed literature summary also contains Topics for Discussion and a Free Quiz on Dogeaters by Jessica Hagedorn.

Jessica Hagedorn's Dogeaters is a play in two acts that deals with the brutal suppression of political opposition to Ferdinand Marcos's government in the Philippines, as framed against the first Manila International Film Festival. Hagedorn playfully rearranges historical events and presents the harrowing and tragic narrative as a radio soap opera.

The play is narrated throughout by the radio soap opera personalities Nestor Norales and Barbara Villanueva. They introduce the central characters of the play. There is Joey Sands, a male prostitute; Senator Avila, leader of the opposition; Romeo and Trini, young lovers who dream of movie stardom; and Daisy Avila, beauty queen, daughter of Senator Avila and lover to Santos Tirador, the communist leader of the New People's Army, the NPA. Observing all of this is Filipino expat Rio Gonzaga, who is back in Manila for her grandmother's funeral.

As the Film Festival approaches, Imelda Marcos is fending off accusations that she hastily buried one hundred killed workers laying the foundation for her new film center. Meanwhile, Senator Avila continues to stir up worker unrest, supposedly safe from harm by his relationship with the head of the military, General Ledesma. Rumors abound that his daughter Daisy is pregnant with Santos' child. As B-List celebrities arrive in Manila for the festival, Joey is picked up by the German director Rainer Fassbinder, whom he takes to a sex show.

As the festival ends, Joey and Fassbinder part ways when Joey steals his camera. By sheer coincidence, Joey steals out of Fassbinder's hotel just in time to see Senator Avila gunned down in the lobby by General Ledesma's protégé, Carreon. He is the sole witness.

Panic spreads through Manila as the General and the Marcos family consolidate power. Romeo is gunned down on the street and framed as the Senator's killer. Daisy, meanwhile, goes to confession to figure out whether she should join the NPA. There, she is arrested by the General and Carreon. In custody she is beaten, tortured, and repeatedly raped until she miscarries. Then, she is released and flees to the mountains. Imelda Marcos blithely denies any involvement.

Joey, meanwhile, flees to his pimp Uncle, who immediately betrays him to Carreon. Joey murders Uncle and flees to his friend Perlita, a drag queen and owner of the nightclub where Joey DJ's. Perlita arranges for the NPA to spirit Joey to a safe house. He is valuable as the only living witness to the Senator's murder. Weeks later, Joey and Daisy meet in an NPA camp and discuss the Senator and their sad love for the Philippines.

The play ends with a collective prayer for hope in Manila. The sprawling events of Dogeaters have been witnessed by Rio, who finds she returns to her home nation more often than she thought she would. Time has passed, and the country has just elected a vapid action star its President. The soap opera continues.