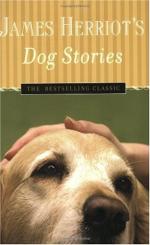 This detailed literature summary also contains Topics for Discussion and a Free Quiz on Dog Stories by James Herriot.

James Herriot, the famed veterinarian whose "All Creatures Great and Small" has enthralled PBS viewers, confesses that his first love always was, and is, dogs. Although a country veterinarian in Darrowby, Yorkshire County, England, whose practice was mainly focused on farm animals, it is canines that capture his heart. In this collection of stories, told with warmth, humor and irony, Herriot establishes himself as a keen observer of both human and animal nature. More importantly, perhaps, he understands and shares the special chemistry between man and dog that has existed for probably thousands of years.

During his boyhood in Glasgow, Scotland Herriot was very much involved with dogs—his own and other people's. He spent many hours trekking Kilpatrick Hills, Campsie Fells, Barrhead and Neilston Pad with a variety of dogs, and especially with his favorite Irish setter, Don. Although drawn to the humanities and literature, Herriot decided rather late in his academic career to pursue veterinary medicine. He graduated from the Veterinary College of Glasgow. He learned his trade from tough, experienced veterinarians who impressed upon him that the profession demanded long hours and complete dedication. Its financial rewards would be modest, but its emotional and human compensation great.

Herriot joined the veterinary practice of Siegfried and Tristan Farnon, in the remote village of Darrowby, where he lived alongside the people and animals who appear in the pages of his books. Here's how he describes his feelings about being a veterinarian:

"I know I am lucky in my job because I get a kick out of just seeing the dogs and cats that come into our surgery. Apart from the medical aspect, there is a constant pleasure for the animal lover in observing the differing personalities of people's pets. Because vets are animal lovers—that's why they become vets in the first place. A lot of people think we are detached and have only a clinical interest in our profession, but it is not so. Ours is a caring profession."

Siegfried Farnon is the senior veterinarian on the staff of Skeldale House; his younger brother, Tristan, acts the part of the younger sibling, enjoying long nights of drinking and socializing. Herriot is somewhat alone in his desire to combine small animal with farm animal veterinary medicine. He earns a kind of respect from the other two vets because of his willingness to work hard for the benefit of the dogs and cats that come to him, while also being deployed to the horses, oxen, cattle, sheep, and pigs of Yorkshire County. It becomes apparent that no one without a warm heart and a strong constitution could survive as a veterinarian in Darrowby.