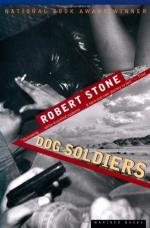 "Dog Soldiers" by Robert Stone is a novel based on the events that occur between an American journalist, a merchant marine, and a suspect government agency regarding 3 kilos of heroin.

The story takes place during the Vietnam War. The 1960s are over but chaos still reigns supreme. The counterculture is expanding and people are becoming even more disillusioned with the government and the status quo. There are several good examples to show that the collective mindset of America has changed. The time period in the book reflects the changing political structure of the US as well as the world.

The book starts out with John Converse sitting on a bench in downtown Saigon. Converse is a journalist of sorts that has put himself on assignment in Vietnam with the hopes of writing a novel or a play. Converse had previous success as a writer but does not refer to himself as a first class journalist because he works for his father-in-law, Elmer Bender, an editor and publisher of a tabloid.

Converse realizes that his time in Vietnam will produce nothing so he decides to agree to smuggle 3 kilos of heroin into the US. In Converse's mind, he has a sure plan. With the help of friend and merchant marine Ray Hicks, Converse can make $40,000. However, Converse is extremely naïve and things quickly go awry.

The heroin is sent to Marge Converse, John's wife, who lives in California. Hicks is followed and the pair is attacked by two men that claim to be Feds. Hicks and Marge go on the run with the heroin. Antheil, a regulatory agent is ruthless in hunting down Marge, Hicks and the heroin. When Converse returns home, he becomes one of the prey. Antheil is determined to track down the heroin. It is clear that Antheil has no intention of turning it in and is in fact a self-serving man with little integrity but the reputation and connections to pull it off.

Converse gives in and is taken by Antheil's men to the place Hicks and Marge are hiding out with the drugs. A shoot out ensues and Hicks, his mentor and law enforcement agents die. Hicks gets away but dies along the roadside, the heroin in his pack. John and Marge manage to get away with their lives.

Along the way the main characters meet up with many unsavory characters including June Owen, Smitty, Danskin, Eddie Peace, Dieter, and others.

Stone based his counter culture views on the activities of the Merry Pranksters, a group of people that traveled across the country in the 1960s. At the forefront of the movement was author and head prankster Ken Kesey.