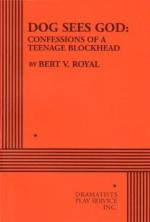 Bert V. Royal
This Study Guide consists of approximately 40 pages of chapter summaries, quotes, character analysis, themes, and more - everything you need to sharpen your knowledge of Dog Sees God.

Dog Sees God: Confessions of a Teenage Blockhead by Bert V. Royal is a play about a teenage boy, CB, who begins to question the existence of an afterlife after his dog dies. Unable to find solace from his friends after his dog's death, CB turns to an artistic classmate, but their rekindled friendship pushes the bounds of what CB's friends are willing to accept, forcing CB to consider who he wants to be. Dog Sees God is a touching and thought-provoking play about being different in a school filled with people who all pretend to be the same.

Throughout the play, CB writes to his pen pal who has never responded. CB and his sister hold a funeral for their dog that was put down after contracting rabies, but they argue about who should say a prayer for the dog. When CB questions his pothead friend Van about where people go after they die, Van tells CB he has recently converted to Buddhism and believes in reincarnation and nirvana. CB's friend Matt believes that the dead return to a vagina that does not belong to their mother. At lunch, Marcy and Tricia discuss Marcy's upcoming party, and after they tell CB that his dog is now maggot food, CB goes to the music room where he listens to Beethoven play the piano and laments his dog's death until Beethoven throws a fit because CB is interrupting the only peaceful time in his day. Beethoven tells CB about how he is bullied every day, blaming CB for not stopping it, but eventually, the two reconcile and agree to reestablish their friendship. Sitting next to Beethoven as he plays, CB kisses him.

Everyone is drunk at Marcy's party, but when Beethoven arrives, Matt torments and teases him for being homosexual, insisting he should leave. CB stands up for Beethoven and kisses him in front of everyone before they flee. Beethoven is distraught that Matt kissed him in front of everyone, but when CB suggests that Beethoven should kiss him, Beethoven does. Furious that Beethoven is messing with his best friend's head, Matt vows to make Beethoven pay. CB visits Van's sister at the mental institution, and when he tells her about having sex with Beethoven after the party, she is proud of him for being different and makes him promise not to apologize. As Matt continues raging about CB and Beethoven, Tricia suggests that Matt is in love with CB. CB is ready to accept that he loves Beethoven, but Beethoven needs time to get used to the idea of CB being his boyfriend, though he cannot stop grinning after CB leaves him alone. Matt visits Beethoven in the music room to harass and threaten him; however, when Beethoven refuses to stay away from CB, Matt slams his fingers in the piano lid.

During a class counseling session to discuss their feelings about Beethoven's suicide, Marcy and Tricia lament their friend's death, but CB is furious at Beethoven for leaving without saying goodbye. He mocks the others' sorrow over losing their "good friend" that they tormented for years before storming out. CB's sister confronts CB later, claiming she knows that CB loved Beethoven, but CB insists he was just going through a phase. His sister encourages him to be different, and CB confesses that he feels like he is a figment of someone else's imagination, unable to make his own decisions. CB finally receives a response from his pen pal, C. S., telling him to stay strong and writing about a new boy who moved near him, his home supposedly being the afterlife, who plays the piano and is caring for a dog that sings along, presumably Beethoven and CB's dog. CB cries for his dog, his friend and himself.

More summaries and resources for teaching or studying Dog Sees God: Confessions of a Teenage Blockhead.