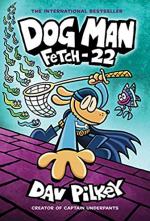 Dog Man: For Whom the Ball Rolls and Fetch-22 Summary & Study Guide

Dav Pilkey
This Study Guide consists of approximately 56 pages of chapter summaries, quotes, character analysis, themes, and more - everything you need to sharpen your knowledge of Dog Man.

Dog Man: For Whom the Ball Rolls and Fetch-22 Summary & Study Guide Description

Dog Man: For Whom the Ball Rolls and Fetch-22 Summary & Study Guide includes comprehensive information and analysis to help you understand the book. This study guide contains the following sections:

This detailed literature summary also contains Quotes and a Free Quiz on Dog Man: For Whom the Ball Rolls and Fetch-22 by Dav Pilkey.

Dog Man was created when a cop and his police dog were hurt in an accident. The cop's head was dying and the dog's body was dying, which prompted a nurse to come up with the idea to sew the dog's head onto the cop's body. They did and Dog Man was created. He immediately became an elite crime fighter, the best officer on the police force. The problem is that Dog Man has some of the mannerisms of a dog, which hampers his ability to be effective.

Dog Man's friends include the Chief, a reporter named Sarah Hatoff and her poodle Zuzu, and Lil' Petey. Lil' Petey is a kitten who was created when a villainous cat named Petey tried to clone himself. Lil' Petey is good and he has a positive effect on the other characters. In the graphic novel titled For Whom the Ball Rolls, Dog Man's inability to focus causes problems and Lil' Petey sets out to help him learn to focus. Lil' Petey bathes Dog Man each time he is distracted by a ball, which eventually makes Dog Man become afraid of balls. When an evil villain named Dr. Scum realizes that Dog Man is now afraid of balls, Dr. Scum creates robotic balls that do his stealing for him. Dog Man hides while Dr. Scum's robots wreak havoc on the city, stealing everything from diamonds to whoopee cushions.

While Dog Man is struggling with his fear, the flea-sized villains Piggy, Bub, and Crunky are working on plans of their own. Piggy tries to steal the famous Hope Mood Ring while Bub and Crunky hypnotize Big Jim, making him into a new super hero, Commander Cupcake. While Dog Man and the others battle the various villains, Commander Cupcake bumbles onto the various scenes just in time to get credit for solving all the crimes.

The relationship between Petey and Lil' Petey continues to evolve during the second novel of this set, titled Dog Man: Fetch-22. Petey is now officially one of the good guys and embraces his role as Lil' Petey's dad. Petey's father, known throughout this guide as Grampa, is in jail as this novel opens, having stolen all the stuff from Petey's Secret Laboratory. Lil' Petey has also made an important discovery. The Supa Brain Dots, which were a main part of the story line of a previous novel of this series, actually cause “supa anger.” That explains why Flippy the fish became a villain in a previous novel. Lil' Petey's research prompts Flippy to be released from jail.

Much of Fetch-22 focuses on fairness, and the Fair Fairy is a television personality until she becomes angry during a show. She is fired as a result and she becomes a villain, accompanied by a group of evil tadpoles who bring a tree to life as their evil sidekick. As Dog Man and his friends battle this new threat, Commander Cupcake again arrives just in time to get the credit.

More summaries and resources for teaching or studying Dog Man: For Whom the Ball Rolls and Fetch-22.

Dog Man: For Whom the Ball Rolls and Fetch-22 from BookRags. (c)2022 BookRags, Inc. All rights reserved.