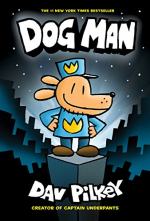 Dog Man, the first novel of the series, introduces George Beard and Harold Hutchins. These fictional characters have been friends since kindergarten. They are now fourth graders. George is the writer of the Dog Man comic series, and Harold Hutchins is the cartoonist. They have been in trouble many times for creating the comics, especially when they are supposed to be doing school work.

The first chapter of Dog Man explains that an evil cat named Petey is watching a cop named Officer Knight and his dog Greg. Petey says Officer Knight has a strong body for fighting, but he is not very smart. Greg is smart, but his body is not good for fighting. Petey sets off a bomb, planning to kill both Officer Knight and Greg. In the hospital, the doctor says that Officer Knight's head is dying and Greg's body is dying. A nurse comes up with the idea to sew Greg's head on Officer Knight's body, saving them both. When Petey hears the news, he realizes he has accidentally created Dog Man, the perfect crime-fighting cop. Petey then makes a giant vacuum, planning to suck Dog Man up. When Dog Man runs to the ocean, the vacuum bag sucks up so much water that it explodes, creating a huge wave. Dog Man surfs out on a surf board that the vacuum also sucked up, saving Petey from being washed away and then arresting him.

Over the course of the comic book, Dog Man shows that he has a strong bond with the police Chief, though Dog Man is often in trouble for acting inappropriately, such as peeing on the floor in the Chief's office. However, when an evil Mayor fires the Chief, Dog Man puts an end to her plan and helps the Chief get his job back.

Petey constantly escapes from Cat Jail, so Dog Man repeatedly captures him. Petey is at the heart of many of the problems, including bringing hot dogs to life so that they begin a rebellion. In every case, Dog Man puts an end to the plots, saving the day and proving that good always wins over evil.

While Dog Man is always battling Petey's plans, he faces other villains as well. Petey uses a paper cut-out of himself to escape jail. The cut-out comes to life, creating Flat Petey. Flat Petey is just as evil as normal Petey. Flat Petey forces a witch doctor to obey his every command. Flippy the fish becomes another of Dog Man's opponents. Flippy is naturally evil. When he gets an overdose of Brain Dots, he develops telekinetic abilities that allow him to rob stores and battle with Dog Man. At every turn, Dog Man triumphs, making it clear that good always wins over evil.