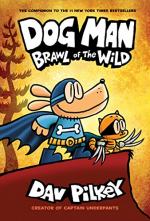 Dog Man: Lord of the Fleas and Brawl of the Wild Summary & Study Guide

Dog Man: Lord of the Fleas and Brawl of the Wild Summary & Study Guide Description

Dog Man: Lord of the Fleas and Brawl of the Wild Summary & Study Guide includes comprehensive information and analysis to help you understand the book. This study guide contains the following sections:

This detailed literature summary also contains Quotes and a Free Quiz on Dog Man: Lord of the Fleas and Brawl of the Wild by Dav Pilkey.

This guide includes Book 5 and Book 6 of the series of graphic novels. In the series, two fifth graders, George and Harold, are the writer and cartoonist of the series. Their story is that a really good police officer and his police dog were in a horrible explosion. The cop's head and the dog's body were dying. A nurse came up with the idea to sew the dog's head on the cop's body, and Dog Man was created. He is a super crime fighter, though he has some faults, such as his tendency to chew up important things and to jump on the Chief. Dog Man's arch nemesis is Petey, an evil cat who occasionally tries to be good. In these two graphic novels, Dog Man encounters a new group of villains. They are a pig named Piggy, a crocodile named Bub, and an ape named Crunky. Dog Man lives in an elaborate doghouse with Lil' Petey, who is Petey's clone but he is a small kitten and is ultimately good.

In Dog Man: Lord of the Fleas, Dog Man and Lil' Petey answer a knock on the door and discover an official from Kitty Protective Services who demands that Lil' Petey be in kitten school. Lil' Petey immediately recognizes the cat as Petey in disguise. Petey reveals that he was in the Critter Scouts as a young kitten, and was kicked out after an incident in which the scouts turned on each other. Petey then caused an issue that forced the Critter Scouts to disband altogether. The other three scouts, Piggy, Bub, and Crunky, are now seeking revenge against Petey and plan to hurt Lil' Petey. Petey plans to run away, but Lil' Petey convinces him to stay and fight Piggy, who has become a villain. After a series of battles, Petey, Lil' Petey, and Dog Man triumph. Petey is taken back to Cat Jail. Since he still must serve time for previous crimes, he tells Lil' Petey that he sees no reason to try to be good. Lil' Petey assures him that he should try anyway.

In Dog Man: Brawl of the Wild, Piggy disguises himself as Dog Man. He then steals money from a bank and frames Dog Man for the crime. Dog Man is sentenced to 14 dog years of hard labor at Dog Jail and taunted as a misfit. The Chief, aided by a robot named 80-HD, mounts a rescue. Dog Man and his friends save the city from destruction by a giant clay gyro monster, but Dog Man continues to wonder if he really is a misfit. His friends confide that they sometimes feel they do not fit in, making it clear that Dog Man is perfectly normal.

More summaries and resources for teaching or studying Dog Man: Lord of the Fleas and Brawl of the Wild.

Dog Man: Lord of the Fleas and Brawl of the Wild from BookRags. (c)2022 BookRags, Inc. All rights reserved.