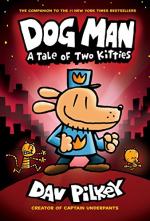 Dav Pilkey
This Study Guide consists of approximately 54 pages of chapter summaries, quotes, character analysis, themes, and more - everything you need to sharpen your knowledge of Dog Man.

This detailed literature summary also contains Quotes and a Free Quiz on Dog Man: A Tale of Two Kitties and Cat Kid by Dav Pilkey.

Dog Man is a crime-fighting hero with the head of a dog named Greg and the body of a cop named Officer Knight. The Chief at the police station often refers to Dog Man as the best cop on the force. As Dog Man, A Tale of Two Kitties, opens, Dog Man assumes the task of guarding scientists who are studying Flippy the fish. Flippy was an evil fish that Dog Man defeated in the previous graphic novel of the series, and the scientists want to learn about Flippy, including his telekinetic powers. Before they can begin their work, Dog Man rolls around on Flippy, further damaging the body. The scientists rebuild Flippy, making him into a robotic fish. They plan to begin their study the following day and leave Dog Man to guard Flippy. As they leave, a lamp falls over, striking the table and throwing Flippy through a window.

Dog Man tries to get Flippy back, but a series of coincidences end with Flippy puncturing a tank that holds Living Spray. Flippy comes to life, then the Living Spray factory comes to life as well. Flippy brings more buildings to life and sets out to get revenge for his childhood treatment.

Meanwhile, Petey has escaped from cat jail and created a clone of himself, expecting that the clone will become his trusted butler. Instead, Petey creates a kitten. Petey expects Li'l Petey to become a villain, but Li'l Petey is kind and good. Petey abandons Li'l Petey, and Dog Man takes the kitten. Later, Petey feels bad for his actions and actually puts himself in danger to save Li'l Petey and Dog Man from Flippy and his army of beastly buildings. By the time Li'l Petey helps Flippy become good, Dog Man arrests Petey for escaping from jail.

In Dog Man and Cat Kid, Li'l Petey is staying with Dog Man, who is having trouble getting to work while taking care of Li'l Petey. Petey shows up, disguised as a nanny, and Dog Man happily leaves Li'l Petey with this random babysitter. Li'l Petey knows this nanny is his papa, and they spend time together. Petey spends all his time trying to convince Li'l Petey to become evil. Li'l Petey refuses to do anything more than pretending to be evil.

A famous Hollywood director named Sam wants to make a movie about Dog Man, but Dog Man's actions make Sam angry. He refuses to let Dog Man participate. A young starlet hires Dog Man as her bodyguard, but that does not work out either. Dog Man is eventually banned from the set entirely. Petey tries to kidnap a famous actress named Yolay, but Dog Man and Li'l Petey foil the attempt. Through it all, Li'l Petey struggles to decide if he has the free will to be good, or if he is destined to be evil, like Petey. By the end of this novel, Li'l Petey learns that it is possible to be good without being perfect. He settles back in with Dog Man but agrees to meet Petey for lunch, as soon as Petey breaks out of cat jail again.

More summaries and resources for teaching or studying Dog Man: A Tale of Two Kitties and Cat Kid.