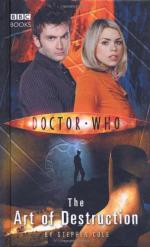 Doctor Who - the Art of Destruction Summary & Study Guide

Stephen Cole
This Study Guide consists of approximately 26 pages of chapter summaries, quotes, character analysis, themes, and more - everything you need to sharpen your knowledge of Doctor Who.

Doctor Who - the Art of Destruction Summary & Study Guide Description

Doctor Who - the Art of Destruction Summary & Study Guide includes comprehensive information and analysis to help you understand the book. This study guide contains the following sections:

This detailed literature summary also contains Topics for Discussion on Doctor Who - the Art of Destruction by Stephen Cole.

"Doctor Who - the Art of Destruction" by Stephen Cole is the story of an alien invasion on a planet in the future. Doctor Who and his traveling companion must fight for their lives as they help fend off the alien species.

Down in the caves underneath the volcano in Africa, Kanjuchi and Adiel go to check on the mushrooms in the new chambers. While they are there, they see a strange substance that looks like gold. It goes after Kanjuchi, attacking him and covering his body while Adiel runs for help.

The TARDIS lands and Doctor Who and Rose Tyler step out. Locals question them on who they are and why they are there when Adiel's screams are heard. One of the men and the Doctor enter the lava tubes while Rose and the other man go to the common room. While they are there, another man brings in a gold-plated vulture.

The Doctor tries to determine what the strange gold substance is while Rose learns more about the people and politics in the area. The local villagers are starving. The little food that they have is taken by rebels. Adiel has worked for weeks to set up a situation where the rebels are caught by the guards, but her plans are not going well thanks to the new arrivals and the gold blobs.

Rose and Basel meet a many-tongued alien named Faltato. He is a thief who is looking for the famous lost art of the Valnaxi. He thinks the art is in the volcano. The Doctor realizes that the golden blobs are there to protect the art.

The rebels show up earlier than anyone expects. The gold blobs are still on the attack, and an alien space ship lands. The Doctor figures out that there is something extremely important in the caverns, and the gold blobs must protect it. The Wurms that came on the alien spaceship have put the blobs on defensive mode. The Wurms take the humans prisoner while they make plans to track down the Lona Venus.

While this is all happening, Adiel learns that Flynn has been using dead people for his experiments regarding food growth. This horrifies her. Still, she is literally linked to the scientist as they are forced to join hands to protect a Wurm. A gold blob comes at her, and she breaks the physical link to the others and is consumed by the blob.

This angers the Doctor, who is determined to save her. He comes up with a protective antidote and sets off to find the Valnaxi in order to save Rose. Wehn he talks with them, he learns about their plan for survival, and he also discovers that their plan went very wrong. They use Rose as a template for their new form.

The scientists escape, and the tunnels collapse. The muck left is perfect for growth, making Adiel extremely happy. Every sets off in their own way, ready to face adventures and the future. The Doctor and Rose take off in the TARDIS while the new Valnaxi templates embrace living rather than just enduring through the ages.

More summaries and resources for teaching or studying Doctor Who - the Art of Destruction.

Doctor Who - the Art of Destruction from BookRags. (c)2022 BookRags, Inc. All rights reserved.