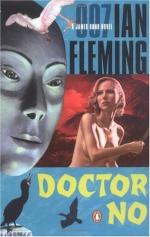 Bond's gun of choice is a Beretta .25 caliber.

M thinks Bond's weapon of choice, the Beretta, is too small and ineffectual. He forces Bond to adopt the Smith and Wesson and the Walther guns prior to his current mission.

Guano is bird excrement that is used as fertilizer. When mined properly, it is worth a great deal of money.

Bond feels that driving around in Strangeways' car is too obvious a target to his enemies, so he has Quarrel hire two men who look like himself and Bond to drive the car to Montego. Bond receives the news a few days later that the car has been involved in a fatal crash.

A group of Whooping Cranes live on Crab Key Island. The Audubon Society has bought the rights to allow a group...

Doctor No from BookRags. (c)2023 BookRags, Inc. All rights reserved.