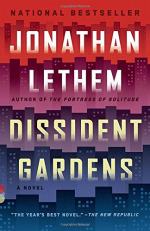 Jonathan Lethem
This Study Guide consists of approximately 31 pages of chapter summaries, quotes, character analysis, themes, and more - everything you need to sharpen your knowledge of Dissident Gardens.

Dissident Gardens is a novel by Jonathan Lethem that recounts the lives of Rose Zimmer and her family who are Leftwing dissidents from the 1950s through to the 2010s. The novel leaps back and forth through time, showcasing different members of the family at different phases and places in their lives, all of which emanate from Rose. Rose, a Polish Jewish immigrant who survived in Europe during the 1930s, has veered Left politically, becoming an active member of the Communist movement in the United States. Her husband, Albert, is also an active member of the Communist movement, and the two obsess over politics to such a degree that they neglect their daughter Miriam.

Their politics infect every part of their lives, ultimately leading Albert to spy in East Germany, and to divorce from Rose. Miriam supports the Left wing politics of her mother, though she never becomes militant, angry, or politically narrow-minded. Miriam herself becomes a full-fledged part of the overall hippie movement, where she meets and falls in love with Irish ballad singer and Leftist activist Tommy Gogan. The two marry and have a son named Sergius. Rose, meanwhile, has an affair with a black Republican police officer named Douglas, for which the Communists threaten her. When Douglas and his wife both die, their son, Cicero, becomes something of a son to Rose, but Douglas rails against this.

Tommy and Miriam, meanwhile, continue with their Leftwing causes. Though they are heavily politically involved, they do not have political blinders the way Miriam does. Their first priority is their son, Sergius. This does not stop them, however, from risking their lives for the Left. They travel to Nicaragua to see about the Sandinista and the revolution underway there, only to be caught up by a militia awaiting its own revolution which kills them. Sergius comes to be raised at a boarding school as per Miriam’s wishes that Sergius not be brought up by her mother should something ever happen to Miriam and Tommy. Years pass. Sergius later visits Cicero to learn more about Rose and the past, but Cicero does not want to talk about the past because his experiences with Rose were so tainted by politics, and because he came to care for Rose’s health before Rose’s death.

Sergius, meanwhile, meets a beautiful young girl named Lydia who is part of the Leftist Occupy Movement of the 2010s. Though she has a boyfriend, Lydia is happy to be sexually involved with Sergius as he drives her to Portland where he will catch a flight and Lydia will go her own way. They have sex in the airport bathroom, which arouses the concerns of the TSA because Sergius has taken so long to check in for his flight. Sergius is uncooperative with the TSA. Sergius’s defiance is a small show of solidarity with the modern-day Left and the Leftist traditions of his family.

More summaries and resources for teaching or studying Dissident Gardens.