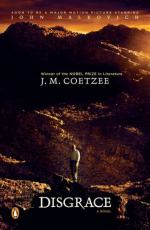 John Maxwell Coetzee
This Study Guide consists of approximately 56 pages of chapter summaries, quotes, character analysis, themes, and more - everything you need to sharpen your knowledge of Disgrace.

Discuss the reasons why David refuses to apologize to the University committee for his wrongdoing.

Do you think Melanie decided to report David on her own, or was she influenced by others? Why?

What do you think Petrus' role in the attack was?

Do you think that the men who raped Lucy will return to cause her further harm?

Why was Bev Shaw so intent on sleeping with David?

Why does Petrus offer to marry Lucy? Why doesn't he talk directly to Lucy about his proposal?

Go forward one year. What kind of life do you see Lucy leading? What about David?

More summaries and resources for teaching or studying Disgrace.