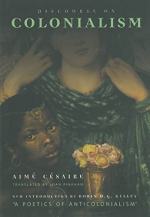 Césaire, Aimé and Pinkham, Joan
This Study Guide consists of approximately 32 pages of chapter summaries, quotes, character analysis, themes, and more - everything you need to sharpen your knowledge of Discourse on Colonialism.

This detailed literature summary also contains Topics for Discussion on Discourse on Colonialism by Césaire, Aimé and Pinkham, Joan.

The following version of the book was used to create this study guide: Césaire, Aimé. Translated by Joan Pinkham. Discourse on Colonialism. Monthly Review Press, 2000.

Robin D.G. Kelley, a historian at UCLA, provides the introduction to this seminal discussion of colonialism and civilization. In his introduction, Kelley provides both contextual information on the book and biographical information on Césaire. Kelley interprets Discourse on Colonialism as a critical work leading up to the more widely read book by Frantz Fanon, The Wretched of the Earth. He pays particular attention to the text’s engagement with Marxism and its use of poetic and surrealist techniques.

Discourse on Colonialism is divided into six unnumbered, untitled sections. The first section opens with three statements about what makes a civilization decadent, sick, and dying. The first lie that Césaire dissects regarding so-called Western civilization is the argument that a civilized society is one that colonizes. He defines colonialism not as evangelization or philanthropy but as the product of a so-called civilization who feels compelled to “extend to a world scale the competition of its antagonistic economies” (33). He concludes the first chapter with the claim that colonialism is incapable of spreading human values.

The second section begins on page 35 with Césaire’s assessment of the damaging psychological affects of colonialism on the colonizer—not the colonized. The European continent proceeds towards savagery, which Césaire connects to the rise of Nazism in Germany. Césaire refuses to interpret Hitler as an exception to Western humanism. He then turns his attention to the plight of the colonized subjects the world over, and defends himself against his critics.

In the third section, Césaire cites quotations from a number of prominent French writers and scientists, all of whom profess their beliefs in whites as superior to “black” and “yellow” (50) races. Césaire points out that while Europe’s petty bourgeois has read everything, their brain functions like a digestive system, filtering out any ideas counter to their worldview.

In the fourth section, Césaire lists the accomplices of colonialism, a list that extends beyond mere bureacrats and which encompasses a number of different disciplines. He offers three particular examples of French humanists infected by racism. As his first example, Césaire cites Gourou, the other a book titled Le Pays tropicaux (Tropical Countries, in English). His second example is Reverend Tempels, a Belgian missionary who advocated for tolerance towards Bantu religious philosophy. And his third example is that of Octave Mannoni, a French psychoanalyst who pathologized the state of being colonized. In the fifth section, Césaire adds the example of Roger Caillois, who assumed that Western Europe was the most superior civilization on the basis of science, knowledge, and even ethics.

In the sixth and final section, Césaire introduces the danger of American imperialism and colonialism, which he predicts will be far worse than that of Europe. Césaire concludes with his hope that Europe will change its ways and that the colonized proletariat will rise up in revolution.

More summaries and resources for teaching or studying Discourse on Colonialism.