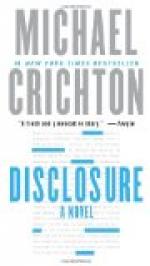 The following version of the novel was used to create this study guide: Crichton, Michael. Disclosure. Ballantine Books, January 19, 2001. Kindle.

In the novel Disclosure by Michael Crichton, DigiCom group leader Tom Sanders was surprised and disappointed when the vice president position he believed he was in line for went to Meredith Johnson, a woman he once dated. He was even more shocked when Meredith tried to reignite their sexual relationship during a meeting the evening she was announced as his new boss. Meanwhile, Sanders was tasked with finding out why his company’s Malaysia plant could not manufacture the new Twinkle drive, a major factor in a promising merger deal between DigiCom and Conley-White, to specifications. With his job on the line, Tom discovered that he had been set up to take the fall for Meredith’s poor decisions.

On Monday morning, Sanders arrived at work believing that he would be named the new vice president of DigiCom. He left that day after Meredith, his former girlfriend and new boss, made a strong sexual advance on him in her office during what was supposed to be a business meeting. Sanders told no one what had happened. Meredith called him later that night and left a message with his wife, Susan, that there was a meeting at 8:30 the following morning with Conley-White executives.

On Tuesday morning, Sanders arrived at work to learn that the meeting had started at 8 a.m. Meredith had already reported to the executives from Conley-White that there were major problems with the Twinkle drive that she did not think they could correct. When Sanders reported different information after he arrived, Meredith accused him of trying to undermine her.

At that point, Sanders went to Phil Blackburn, the company lawyer, to report that he could not work with Meredith. Blackburn informed Sanders that Meredith had already reported that he had sexually harassed her but did not plan to press charges. Sanders argued that it was Meredith who had attacked him. Blackburn did not seem interested in listening to Sanders until Sanders hired an attorney and threatened to report the harassment publicly.

Even though lawyer Louise Fernandez told Sanders that she did not think he had a chance to win and that filing a case against DigiCom would probably ruin his life, Sanders did not feel he had a choice. A mediation intended to resolve the issue was scheduled for Wednesday.

During this mediation on Wednesday, Meredith first lied about her side of the story. During a lunch break, Sanders realized that he had unintentionally called John Levin, a business contact, while he was meeting with Meredith. He thought he had left a message on Levin’s phone and then hung up, but the phone remained on. The encounter with Meredith was recorded on Levin’s answering machine, giving Sanders some proof of what had happened.

Meanwhile, Meredith and her lawyers determined that Sanders’ phone had been on and that there was probably a recording. Because of this, Meredith changed her story to agree with Sanders’ but said that he was as much at fault in the incident as she was. Meredith’s lawyers ordered the mediation ended because Sanders would not agree to their terms. Later that day, both Louise and Sanders were shocked when Blackburn offered Sanders a settlement agreeing to his demands for full benefits including stock options. They asked only that Sanders talk about the Twinkle drive during a meeting with John Marden, the CEO of Conley-White, scheduled for the next day.

As Sanders was preparing for that meeting, he overheard a discussion between Meredith and Blackburn in which Blackburn was telling Meredith that they would need to demolish Sanders during the next day’s meeting. Sanders began investigating how Meredith and Sanders planned to discredit him and discovered that the problems with the Twinkle drive had been diagnosed, but he had not been brought up to date on what had been discovered.

Because Sanders’ computer access had been downgraded, Sanders and Louise accessed both DigiCom and Conley-White’s databases through a new virtual reality program that had been created by DigiCom. They learned that Meredith had been in charge of a —— that had tried to make peace with the Malaysian government by using manual labor instead of an automatic chip installer. She had also cut costs at the plant by reducing the air cleaning system, meaning that dirt from the air was getting into the units, causing them to malfunction. All memos about these changes had been deleted, giving Louise and Sanders no proof of what had really happened.

At home that night, Sanders received a telephone call from Mohammad Jafar, the line supervisor in Malaysia. Jafar had been forced to take a vacation in the hopes that he would not talk to Sanders about the problems in the plant. Because Jafar was honest, he called Sanders anyway. He faxed memos to Sanders proving that Meredith had been responsible for the changes at the plant in Malaysia, not Sanders. He was also able to send Sanders footage of a video call between Meredith and Arthur Kahn, the plant manager, about the troubles at the plant and Kahn’s concerns about the detrimental impact the reduced air quality was having on the parts. He believed that Sanders was smart enough to figure out what happened, but Meredith assured Arthur that Sanders would quit his job before he found out for sure what had happened.

During Thursday’s meeting, Sanders informed both the DigiCom and Conley-White executives of what had caused the production problems with the Twinkle drives. Meredith tried to argue that Sanders was lying about her involvement in the issues, but Sanders was able to prove that she was wrong. Meredith was asked to leave the meeting and Sanders was encouraged to continue his presentation about the Twinkle drive.

Later, it was announced during a press conference that the merger between DigiCom and Conley-White would be going through. Stephanie Kaplan, the former CFO of the company would be stepping up into the vice president’s position. Meredith was fired.