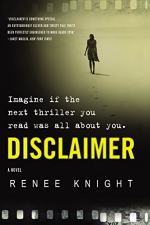 The whole experience left me with a sensation that I had reached down into a blocked drain and was groping around in the sewage trying to clear it. But there was nothing nothing solid to get hold of. All I felt was soft filth, and it got into my skin and under my fingernails, and its stink invaded my nostrils, clinging to the hairs, soaking up into the tiny blood vessels and polluting my entire system.
-- Stephen (chapter 6)

Importance: This is Stephen's reaction to finding lewd photographs Nancy had hidden before she died. It is originally implied that the photos are of Nancy but it is later revealed they are of Catherine, taken by Jonathan before raping her. These extreme emotions lead him to seek revenge on Catherine.

The smell came from the corner near Nancy's desk. I approached it, hand clamped over my nose and mouth, and there it was. A body...
-- Stephen (chapter 8)