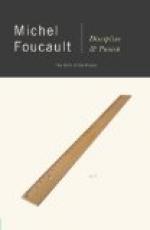 This Study Guide consists of approximately 59 pages of chapter summaries, quotes, character analysis, themes, and more - everything you need to sharpen your knowledge of Discipline and Punish.

This detailed literature summary also contains Topics for Discussion on Discipline and Punish by .

The following version of this book was used to create this study guide: Foucault, Michel. Discipline and Punish: The Birth of the Prison. Translated by Alan Sheridan. Vintage Books, 1995.

Published in 1975, Michel Foucault’s Discipline and Punish: The Birth of the Prison is a study of the historical processes behind the development of punishment in the West, particularly France. Foucault uses a genealogical method to examine the origins of the power structures that control the modern penal system that led to the creation of a docile and obedient populace. Discipline and Punish is divided into four sections, each of which roughly correspond to a period in penal history. Although Foucault’s study is not strictly chronological, he aims to show how the era of torture led to the development of modern disciplinary society.

The first part, entitled, “Torture,” begins with two contrasting images. The first is a description the 1757 public execution of Robert-Francois Damiens, who was condemned to death for attempted regicide, and the second is an 1838 daily prison schedule. Foucault writes that he wants to explore the forces that made the second style of punishment emerge from the first. Absolutist France was characterized by “supplice,” a means of punishment that targeted the body, through a public spectacle that involved execution and torture of criminals. During this time, crimes were seen as a direct attack against the King, who consequently had the right to revenge on the criminal’s body; this was done in public as an affirmation of the sovereign’s power. Despite the gruesome nature of torture, Foucault contends that he wishes to push back against the notion that punishment has become more humane over time. With this in mind, Foucault writes that he will investigate “the microphysics of power,” the covert mechanisms through which power relations are inscribed onto the individual body.

The next part, “Punishment,” traces the concerns voiced by eighteenth century reformers of punishment. The reformers, who were mostly lawyers from within the system, argued that there should be a clear and unarbitrary link between a crime and its penalty, punishment should work through “signs” that have a deterrent effect on the general population, and there should be access to work and education. However, Foucault suggests that these reformers were self-interested; the insistence on civil rights was a product of the rise of the middle-class, indicating the social and political changes that were about to take place in the French Revolution. These reformers sought to create a more efficient form of power that functioned like a machine, a more even distribution of punishment that individualized criminals while insisting on the “humanity” of the criminal, which was really a new method of control.

The third part, “Discipline,” explores the creation of docile people alongside a new focus on discipline starting from the eighteenth century. Developments in science converged with disciplinary methods to create useful and obedient prisoners; methods such as controlling their time and space served as a form of training that would cause people to function as instruments of power. Following a military-camp layout, prisons, hospitals, and schools began to function as surveillance institutions that observed individuals at all times. Power used to target the body, but now it targeted “the soul” through vision, i.e constant observation. The ultimate symbol of the modern disciplinary institution was Bentham’s Panopticon, which was structured in a way that ensured that inmates never knew whether they were being watched. The Panopticon, though never fully adopted, envisioned the creation of individuals that were useful and obedient at a low cost. This disciplinary method spread throughout many institutions and into the social body.

The final section, “The Prison,” turns to examine the nineteenth century emergence of imprisonment as the main means of punishment. The rise of the middle-class propagated the ideals of liberty and equality, which made the prison seem like a “natural” development as something that targeted those values. The prison controlled every part of an individual through the creation of a body of psychological, social, and biological knowledge – they became “objects” to be known. This marked the appearance of “delinquency,” a type of criminal that can be controlled through disciplinary means. The goal of the prison was not necessarily to reduce crime, but to control it through a police-prison-delinquency system that served the interests of the bourgeoisie. Foucault characterizes this new disciplinary society as a “carceral archipelago,” a network of institutions that wield their power across all areas of the social body. Punishment extended beyond the prison system, as various institutions targeted people that exhibited even the slightest amount of abnormality. Carceral society normalized power-knowledge, to the extent that this extent of societal control was unlikely to change.

Despite its failures, Foucault asserts that the real change to the prison system is unlikely because of its pervasive influence on our society. Regardless, Foucault hopes that his study will prompt further research into “the power of normalization and the formation of knowledge in modern society” (308).

More summaries and resources for teaching or studying Discipline and Punish.