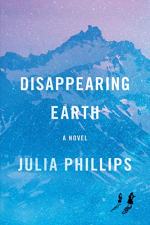 Julia Phillips
This Study Guide consists of approximately 48 pages of chapter summaries, quotes, character analysis, themes, and more - everything you need to sharpen your knowledge of Disappearing Earth.

The following version of this book was used to create the guide: Phillips, Julia. Disappearing Earth. Random House, 2019.

Disappearing Earth begins at the end of the summer on Kamchatka Peninsula. The sisters Sophia and Alyona Golosovsky spend an August afternoon by the water in the city center. When a strange man asks them for help with a twisted ankle, the girls agree to walk him to his car. They then accept his offer for a ride home. It is not until the man takes Alyona's cellphone in the car and misses the girls' turn that Alyona realizes they are in danger.

After the girls' disappearance from Petropavlovsk, the community is thrown into terror. Parents like Valentina Nikolaevna refuse to let their children play outside, particularly in the location where the girls were last seen by a local, Oksana. The city inhabitants believe a foreigner is most likely to blame for the crime, and begin fiercely working with the police to find the girls' abductor. Oksana, out walking her dog the day the girls disappeared, can only remember seeing a strange-looking white man leading two young girls into a well-kept black vehicle. The police are unable to use this information to solve the case.

As time passes, the community increasingly doubts Oksana's report, believing she worked with the police to concoct the notion of a kidnapping at all. Valentina, however, determined to be a part of the case, forms an alliance with the key investigator Kolya Ryakhovsky. The investigation strays then to the Golosvosky girls' estranged father, ultimately bearing no productive leads. The police force grows disillusioned, assuring the community they will search the river for the girls' bodies as soon as spring comes.

Meanwhile the northern communities cannot help comparing the Golosovsky girls to Lilia Solodikov's disappearance almost four years prior. As a young girl, Lilia was known to be wild and promiscuous. The community attributes her disappearance to her own foolishness. The police give up the investigation after little effort, which her family believes is because she is a native woman. Despite these dynamics, her mother Alla is convinced Lilia was also abducted and most likely murdered. Refusing to believe this morbid theory, her sister Natasha thinks she ran away because of their difficult family. For years she longs for her sister's return, searching for her everywhere she goes.

Almost a year after her daughters Sophia and Alyona go missing, Marina is plagued by grief and despair. She reluctantly agrees to attend a traditional New Year's festival in the northern town of Esso. While there, Alla approaches her, attempting to connect over their mutual loss. Marina, however, has no interest in forming an alliance with Alla, assuring her she has done nothing to manipulate the police as Alla believes.

During the second day of the festival, a reporter, Chegga, confronts Marina and questions her about her daughters' case. She reluctantly recounts the few details she knows by way of Oksana. Never having heard the full story, Chegga has a revelation, connecting the crime to an old classmate, Yegor who lives by himself in Esso and travels frequently to the city. After a series of discussions, Chegga leads Marina and Natasha to Yegor's house. While looking through the windows of his parked car, Marina spots Alyona's cellphone charm hanging from his rearview mirror.

She calls the police and explains what they have found, begging them to search his home. After several hours the police arrive. They find Sophia, Alyona, and Lilia all trapped inside Yegor's house.

More summaries and resources for teaching or studying Disappearing Earth.