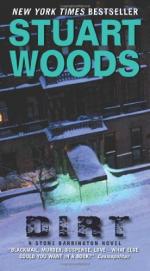 Stuart Woods
This Study Guide consists of approximately 38 pages of chapter summaries, quotes, character analysis, themes, and more - everything you need to sharpen your knowledge of Dirt.

This detailed literature summary also contains Topics for Discussion and a Free Quiz on Dirt by Stuart Woods.

Three of the biggest names in American gossip have been targeted and publicly humiliated by fax. Under the heading of DIRT, Amanda Dart, her employer Richard A. Hickock and Allan Peebles, Editor-in-Chief of the American Infiltrator are all exposed as individuals with very sordid sex lives. Amanda is photographed in bed with a wealthy real estate developer who happens be married. Peebles is videotaped playing "horsey" with a supposed pizza deliveryman. Hickock's tawdry affair with a 19-year-old is uncovered. Amanda hires Stone Barrington, an ex-NYPD detective, to find out who is feeding information to DIRT. From the beginning, Amanda's staff is all considered suspects. Through a process of elimination, Amanda Dart's longtime secretary and confidante, Martha McMahon eventually becomes the primary focus of Stone's investigation.

Stone meets Arrington Carter at one of Amanda's dinner parties, and he is instantly smitten. Stone learns that Arrington has just gotten out of a relationship with the potentially violent and devilishly handsome Jonathan Dryer. Jonathan, a male model with a fondness for excellent food, good wine and designer wristwatches, had accompanied Arrington to several high class parties in homes which were subsequently burglarized.

In the meantime, Stone's ex-partner Lieutenant Dino Bacchetti and his wife Mary Ann are searching for an apartment to purchase in Manhattan. Against his own better judgment and Stone's advice, Dino Bacchetti decides to allow his father-in-law, Mafia boss Enrico Bianchi, help with the purchase of the apartment.

After one of his associates is murdered, Barrington learns that Martha McMahon also had a brief affair with Jonathan Dryer and that it was she who provided him with the titillating details of the gossip-mongers' lives. Jonathan Dryer disappears, Martha McMahon meets an unfortunate end near Amanda's home is Connecticut, and Stone Barrington is left with no leads, several unsolved burglaries. And Allan Peebles, trying to salvage what is left of his pride, tells Amanda Dart something that will lead to the deaths of three more people and the personal and professional devastation of at least to others, including herself. It is at this juncture that Dick Hickock makes a decision that will have cataclysmic results.

After a visit to the mysterious Professor Samuel Bernard an afternoon with boozy New Jersey divorcee Louise (Lou) Burch, Stone Barrington begins to close in on the people behind the inflammatory DIRT messages.

Eventually, the NYPD, the Mafia and Stone Barrington are all looking for the same men. However, one issue of DIRT remains to be published. The final installment is sent to only one recipient. The New York gossip game grinds on, using the biggest names in the business as grist for the mill.

More summaries and resources for teaching or studying Dirt.