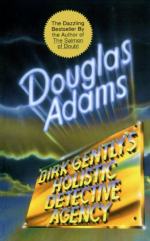 In Dirk Gently's Holistic Detective Agency, private investigator Dirk Gently draws his old college friend Richard MacDuff into a twisting investigation to ultimately save the world. A ghost, millions of years old, has been roaming the Earth in guilt and loneliness. Driven mad, he wants only to go back in time and correct the mistake that killed him and his friends, a group of aliens on their way to establish a Utopian paradise on another planet. With the help of the only time machine on Earth, Dirk at first agrees to assist, until he realizes that the aliens' intended paradise is Earth itself. With some tricky time-travel, Dirk and Richard must stop the alien ghost from preventing the accident that started life itself on primordial Earth.

As the story begins, Richard MacDuff goes to visit his old college tutor, Reg. Unbeknown to Richard, the ghost of an alien who's wandered the Earth for billions of years has, during the evening, tricked Reg into bringing his secret time machine to an alien planet to pick up an Electric Monk, which the ghost believes he can easily possess. The Monk, though, is faulty, and the ghost follows Richard home, trying to take over Richard's mind. The ghost tries to get Richard to change his past mistakes, but Richard unconsciously rebels. The ghost then finds a more willing victim, Michael Wenton-Weakes, an ousted magazine editor who is willing to slay the man who took his place.

Meanwhile, the Electric Monk is loose in a strange society. Without meaning harm, he ends up shooting and killing Richard's employer, Gordon Way. Dirk Gently, a former college friend of Richard's, has run across Richard by accident and noticed Richard's odd behavior under the ghost's influence. He also realizes that Richard is a person of interest in the bizarre murder of Gordon Way. Intuiting that something strange is happening, Dirk hypnotizes Richard to find out as much information as he can.

Based on the information Dirk learns from Richard under hypnosis, Dirk realizes that Reg has a time machine and that a ghost is trying to manipulate events. He goes to see Reg and learns that the time machine is actually Reg's rooms on the Cambridge campus. Reg has been aware of the ghost, who tried to lure him into changing one of his past mistakes by saving the dodo birds from extinction. Reg is ancient and doesn't remember anymore who he is or what he used to do or where his time machine came from.

The ghost finds Richard, Reg, and Dirk at the time machine. Now in control of Michael Wenton-Weakes, he pleads to be brought back in time to change his mistake and save his friends. The aliens had landed on Earth, and one of their engines had a problem. Mistakenly believing the engine was fixed, the ghost had caused an explosion that killed all the aliens. What the ghost does not tell them is that the same explosion caused the start of life on Earth. Against his better judgment, Dirk agrees to help the ghost. At the last moment, Dirk realizes what's really going on. Dirk, Richard, and Reg travel back in time to change events so that the ghost cannot make a connection with Michael Wenton-Weakes. Unknown to anyone, they save the human race.