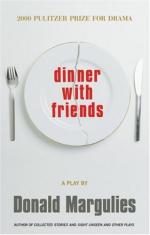 Books Like Dinner with Friends by Donald Margulies | Suggested Reading

Margulies' Collected Stones (1996) was a 1997 Pulitzer Prize finalist for drama. The play concerns the developing relationship between a young writer and her mentor. The plot turns when the mentor feels betrayed because the young writer publishes a book that closely resembles details in the mentor's life.

Sight Unseen (1991), by Margulies, was an Obie award winner and tells the story, in numerous flashback scenes, of a young artist and his struggle to let go of his past, specifically his relationship with a former lover and one-tune muse.

Plays from South Coast Repertory (1993) is a collection of plays that have been performed at one of Donald Margulies' favorite theaters. This collection includes six plays, which include Prelude to a Kiss, by Craig Lucas, as well as Sight Unseen, by Margulies.