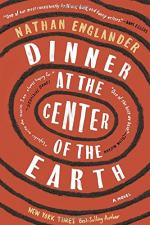 Dinner at the Center of the Earth Summary & Study Guide

Dinner at the Center of the Earth Summary & Study Guide Description

Dinner at the Center of the Earth Summary & Study Guide includes comprehensive information and analysis to help you understand the book. This study guide contains the following sections:

This detailed literature summary also contains Quotes and a Free Quiz on Dinner at the Center of the Earth by Englander, Nathan.

The following version of this book was used to create this study guide: Englander, Nathan. Dinner at the Center of the Earth. Knopf, 2017. First Edition.”

• * Note: The plot has a nonlinear structure. This summary will reflect these abrupt setting-changes in order to demonstrate exactly how the reader puts together the information.

In 2014, Shira lives in the midst of the Israel-Palestinian conflict, her home being located in a kibbutz on the Israeli side of the Gaza Border. Military attacks are common. At the same time, Prisoner Z sits a jail cell in the Negev Desert, watched by cameras and his keeper, a character only known as “the guard.” These two have built somewhat of a friendship during Prisoner Z’s captivity.

After these introductions, the narrative’s setting switches to Paris in 2002. Z visits a restaurant where he meets a woman with whom he would fall in love; she is only referred to as “the waitress” in the novel. He also sees a suspicious-looking male-waiter who he calls the Huguenot.

Back in 2014, the reader meets the General, a very important Israeli politician who lies in a coma in a hospital near Tel Aviv. Ruthi, the guard’s mother, is his caretaker. She prays for his revival.

The setting again switches to 2002. A character named Farid, living in Berlin, enjoys sailing and has become incredibly successful in his business. Having family members in Gaza, Farid dreams of a complete Palestinian victory over Israel.

In 2014, the General’s consciousness exists in a setting that Englander calls “Limbo.” The General continuously remembers the day his son accidently shot himself to death.

Back in Berlin in 2002, Farid meets a Canadian man named Joshua at the yacht club. They become somewhat friendly, having dinner and making future places to go sailing together.

Still in 2002, Z continues visiting the restaurant in Paris where he met the waitress in hopes of seeing her again, which he does not despite his many trips. One night, Z goes for a walk around Paris. He wanders to a bookstore in which he sees the waitress. They flirt before going to a café together. She returns to Z’s apartment with him, and she stays the night.

In 2002, Berlin, Joshua and Farid go sailing and discuss their lives; they seem to be developing quite a friendship.

In 2014, from his jail cell, Prisoner Z writes a letter to the General, appealing for his release or at least his listing in an official record as a prisoner. He worries that he will die here without any proof of his existence.

In 2002, Berlin, Joshua and Farid again go sailing. On this trip, Joshua reveals having business troubles. Farid claims to be unable to alleviate Joshua’s problems. In this same year in Paris, the waitress discovers that Z professionally works as a spy. Back in Berlin, once again sailing, Farid has reconsidered and offers to help Joshua move merchandize into Gaza. They make business plans together.

In 2014, the General appears to be dying. Many family members have gathered at the hospital. In Paris in 2002, Z and the waitress have spent every day and night together. One morning, she makes Z dinner. While eating, she reveals that she saw the Huguenot waiter while shopping for groceries earlier that day. Z panics. The waitress tells Z that she let him into Z’s building with her because he claimed to be going to another apartment in same building. Z gathers his stuff and tells the waitress that they need to run, worried that the Huguenot is coming to kidnap him. They take a taxi to a luxurious Parisian hotel.

Back in 2002 in Berlin, Joshua awakes to a phone call from Farid. Farid accuses him of taking advantage of their business deal. He claims that Joshua is responsible for a massacre that has just occurred in Gaza. Though not in straightforward terms, Joshua admits his guilt to Farid.

In 2014, Ruthi stands over the General’s body, trying to tell the hospital staff that the man is dying. They doubt her, but that night, she watches him pass. Afterwards, Prisoner Z sits in his cell, playing backgammon with the guard who informs his charge that the General has died. Prisoner Z then learns that the General had been in a coma for the past eight years.

In 2002 in Berlin, Joshua’s butler Sander informs him that Joshua has been removed from his current position, because of his conversation with Farid and admission of guilt. Another man has been hired to take his place, and thus, the character known thus far as Joshua becomes “Z.” He is told to return to Paris. On his trip to France, Z calls Farid and offers his help to the Palestinians. In Paris in 2002, Z tells the waitress about this history in Berlin and how it continues to affect him. In Paris, he reports to his new superior’s office and asks for a return to America to see his supposedly dying-mom. This illness, though, is a fib created by Z in order to escape. Z’s boss tells him he can return to America as long as he stops in Tel Aviv first to finish some business. In the Parisian hotel room they rented, Z and the waitress discuss what can be done to save Z. The waitress proposes that they get her father’s help. She offers to drive them to Italy where they could ask her father. Z tells no one of this plan and rides in the passenger-seat with the waitress driving. They ride into Italy without even being stopped at the border.

In Italy, Z meets the waitress’s wealthy father who offers to help smuggle Z on a plane back to America. They enjoy a full day relaxing, but on the way to dinner, Israeli operatives kidnap Z. Z has been tricked. The waitress, the Huguenot waiter, and Shira are involved in Z’s transport back to Israel for punishment under orders from the General. Z then arrives in the jail cell in the Negev Desert where he remains until 2014. He has become “Prisoner Z.”

In 2014, Shira dreams of being with her lover, the mapmaker who lives on the opposite side of the Gaza Border. In the same year, Ruthi attempts to recover from the General’s death, while Prisoner Z is tortured by the thought that he will die in this jail cell. The guard attempts to give him comfort. Shira and the mapmaker brainstorm ideas of how they might be together if neither can cross the border. He proposes that they meet underground in one of the tunnels that run between Gaza and Israel.

The guard brings Prisoner Z his annual holiday present, a robe. This time though the robe’s belt was left hanging through its loops. Though it is not explicitly written, Prisoner Z most likely commits suicide through hanging in his shower using this belt. In the final section of the novel (still in 2014), Shira and the mapmaker have dinner in a tunnel while sounds of war rain down from above. They embrace.

Dinner at the Center of the Earth from BookRags. (c)2022 BookRags, Inc. All rights reserved.