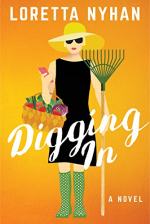 Digging In Summary & Study Guide includes comprehensive information and analysis to help you understand the book. This study guide contains the following sections:

This detailed literature summary also contains Quotes and a Free Quiz on Digging In by Loretta Nyhan.

The following version of this book was used to create this study guide: Nyhan, Loretta. Digging In. Lake Union. 2018. First hardcover edition.

Paige Moresco’s perfect life ended when her husband suddenly died two years ago. In Willow Falls, Illinois, Paige was struggling to raise a teenage son while caring for her house and job. The advertising company at which she worked recently came under new management. Her new boss Lukas promised to improve the business with the guidance of a book-guide to success authored by Petra Polly. He told his employees that he planned to fire two of them.

One night at home, Paige got drunk and began digging a hole in her backyard. Day after day, she did not stop digging. Her neighbor Mr. Eckhardt started to become upset, threatening to report her for violating community standards. Paige decided to turn her yard into a garden and enlisted the help of a quirky female vendor from the nearby farmers’ market. Paige’s neighbor did not relent. One day, he arrived at Paige’s door with a police officer. This cop though only warned Paige to beware of gas lines.

Paige, her farmer friend Mykia, and two of her coworkers Jackie and Glynnis became invested in Paige’s garden. However, her son Trey was less enthusiastic about his mother’s activities. One day while digging a hole for a blackberry bush, Paige discovered a buried box along the property line that she shared with her Mr. Eckhardt. Inside the box, she found a dress and earrings.

One night, Paige heard a police siren nearing her home. The cop whom Paige previously spoke to about her gas lines delivered Trey to her door. Her son had been caught stealing. Meanwhile, at work, one employee was fired. Lukas though still planned to soon terminate another employee.

Paige continued to see the same police officer. He gave her canning lessons after learning of her gardening and future plans to make salsa from her tomatoes. Mykia had been consistently helping Paige tend to her plants. They devised a plan for Paige to host a garden party.

A junior in high school, Trey refused to drive, because his father died after an auto accident. Because Trey needed to complete drivers’ education in order to graduate, Paige encouraged her son to learn. He and Paige fought over the subject frequently. An attempt to teach Trey to drive left everyone unhappy and caused his friend’s mother to scold Paige for forcing Trey to drive.

On the night of her garden party, Paige wore the dress and earrings that she found buried in her yard. The police officer, Sean, was in attendance. Paige had begun to develop romantic feelings for the man. As the night wore on, Paige and Sean began dancing when suddenly Mr. Eckhardt interrupted. Paige’s neighbor accused her of stealing the dress she wore from him and his wife. She gave the dress back to her neighbor. Another day, Paige tried to return the earrings to her neighbor in exchange for an explanation for the buried items. He threw the earrings on the ground before her in response.

Paige and Sean’s relationship progressed. They were dating. Paige continued to receive pushback for her gardening. She decided to ignore the cease and desist letter found on her porch.

Hearing that Petra Polly planned to visit Willow Falls for a book-signing event, Lukas devised a plan to recruit her business in person. At the event, Paige was the last person in the book signing line, and she successfully convinced Petra to let Paige take her somewhere. Petra wanted to go to Paige’s home. Paige agreed.

Petra was impressed with Paige’s garden. They spent the evening together chatting. Petra was not the person Paige expected the author to be. Petra was loud, British, a chain-smoker, and anything but proper. Later that night, Paige discovered many of her tomato plants uprooted outside. She did not know the culprit.

The next morning, Paige took Petra in to work with her. Lukas and his employees pitched their advertising services. Lukas promised to fix Petra’s problems. Despite Petra’s initial resistance, Lukas eventually won Petra over on the condition that no one would be fired from Paige’s company. Petra and Lukas shook hands. After work, Glynnis admitted that she was the one who destroyed Paige’s tomato plants. She apologized, and Paige ultimately forgave her coworker.

In the last chapter, Sean and Paige convinced Trey to drive Sean’s police car. Trey agreed on the condition that the two adults ride inside with him. In the car, Sean directed Trey’s movements. Paige was thrilled watching her son drive the police car onto the road and “into the future” (237).

Digging In from BookRags. (c)2022 BookRags, Inc. All rights reserved.