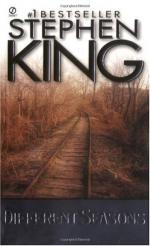 Stephen King
This Study Guide consists of approximately 42 pages of chapter summaries, quotes, character analysis, themes, and more - everything you need to sharpen your knowledge of Different Seasons.

This detailed literature summary also contains Topics for Discussion and a Free Quiz on Different Seasons by Stephen King.

Different Seasons is a collection of four fiction novellas by Stephen King. Rita Hayworth and the Shawshank Redemption concerns Andy Dufresne, a banker wrongly accused of killing his wife and her lover. He is sent to Shawshank Prison, where he befriends Red Smith. Red gets Andy a rock hammer since Andy is interested in geology, and later gets him a poster of Rita Hayworth for his cell wall. Andy begins laundering money for the warden. A new prisoner named Tommy Williams realizes he knows who really killed Andy's wife. Andy goes to the warden, Sam Norton, but the warden refuses to help him. Norton sends Williams to another prison to keep him quiet. Andy soon escapes and flees to Mexico, and once Red is paroled, he joins him.

In Apt Pupil, Todd Bowden, a thirteen year old boy discovers a man named Arthur Denker is really a Nazi, Kurt Dussander, who ran the Patin concentration camp. He blackmails Dussander into telling him about the concentration camps. Todd's grades start slipping since he is spending so much time with Dussander, and his parents are called to meet with guidance counselor Ed French. Dussander pretends to be Todd's grandfather and convinces Ed French that Todd will bring up his grades. Both Todd and Dussander start killing winos to relieve their bad dreams, brought on by the talk of the concentration camps. Dussander has a heart attack while burying a wino in his basement. He is taken to the hospital, where his roommate recognizes him as a Nazi. Dussander commits suicide to avoid prosecution. Ed French comes to Todd, asking why a Nazi pretended to be his grandfather, and Todd shoots him. Todd takes a gun to the highway overpass and is taken down by police.

In The Body, Gordon LaChance, Chris Chambers, Teddy Duchamp, and Vern Tessio learn the location of the body of a missing boy. The boys plan to hike to where the body is and discover it so they can be heroes. They arrive at the body to find that Ace Merrill, leader of the gang Billy belongs to, also wants to claim the body. Chris threatens Ace with a gun and Ace leaves, although his gang later beats up the boys. The boys don't take the body, and Ace eventually places an anonymous call about the body's location. Chris, Teddy, and Vern all die in the years after their adventure.

In The Breathing Method, David Adley is a member of a mysterious club, where the members tell stories. One member, Emlyn McCarron, is a doctor and tells a story about an unwed woman who got pregnant. She was killed while arriving at the hospital on an icy night. Although she was decapitated, she kept breathing for several minutes until the baby was delivered.

More summaries and resources for teaching or studying Different Seasons.