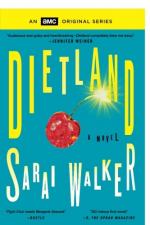 This detailed literature summary also contains Quotes and a Free Quiz on Dietland by Sarai Walker.

Dietland tells the story of Alicia “Plum” Kettle, a woman who holds back from living her life to the fullest because of society’s unkind responses to her weight, who changes her attitude about her life, the world, and her body after encountering a group of radical feminists who are tangentially connected to a series of worldwide terrorist attacks directed against the patriarchy.

In part one, “Rabbit Hole”, narrator Plum recounted the story of a young woman who followed her around her Brooklyn neighborhood (who is later revealed to be named Leeta). Plum was employed to respond to emails sent by teenage girls seeking advice from her boss Kitty, editor of a popular teen magazine. In the emails, Plum pretended that she was Kitty. Plum had been overweight all of her life and she intended to have weight loss surgery later in the year. Leeta followed Plum to Kitty’s office at the Austen Media headquarters in Manhattan and gave her a book called “Adventures in Dietland” by an author named Verena Baptist.

Part two, “Alicia and Plum”, details Plum’s teenage experiences following a diet called the Baptist Program. After beginning the program Plum lost a lot of weight very quickly and was pleased with the results but she soon found that she was extremely tired and struggled to concentrate or enjoy her life. Footnotes from the book “Adventures in Dietland” are included throughout this section, revealing how dangerous the Baptist Program was and that the executives of the company knew that it was ineffective. Plum eventually regained all of the weight she lost during the program and blamed herself for the failure, whereas the footnotes reveal that participants were set-up to fail.

In part three, “Drink Me”, the narrative returns to the present day. Plum was summoned to Austen Media where she met Julia, the manager of the beauty closet and Leeta’s boss. Julia confessed that she had sent Leeta to follow Plum to find out if Plum could help her with her secret mission inside Austen Media.

Julia arranged for Plum to meet the “Adventures in Dietland” author, Verena Baptist. Verena was horrified to hear that Plum intended to have weight loss surgery and offered her twenty thousand dollars as an incentive to participate in what she called the “New Baptist Plan”, intended to convince Plum not to go through with the surgery. Verena convinced Plum to stop taking her antidepressants and introduced her to a former actress who showed Plum the downsides of living a life devoted to conventional beauty standards: she took Plum to have all of her body hair waxed and bought her tight, restrictive underwear to hold her body into a certain shape. Verena sent Plum on a series of blind dates in which the men were rude about Plum’s appearance.

Meanwhile, a series of terrorist attacks are reported in interludes separate from the main narrative: rapists in prominent legal cases have been murdered by a group known only as “Jennifer”. Two of the murder victims had been convicted of raping a 12 year old girl named Luz, who subsequently committed suicide.

Plum saw Leeta’s face on television screens in Manhattan and realized that she was implicated in the Jennifer terrorist attacks. Disturbed by the news and the other dramatic changes in her life, Plum went to stay with Verena at her feminist organization, Calliope House.

In part four, “Underground”, Plum lived in a basement apartment of Calliope House intended to give her time to rest and reflect. Verena gave Plum the twenty thousand dollars for reaching the end of the New Baptist Plan. Plum befriended a woman with a severely scarred face named Sana. There was a room in the basement that constantly screened hardcore pornography as a way to educate women about sexual objectification. Plum decided to return to the outside world.

In part five, “Drink Me”, Plum started to work as a cook for Calliope House. She gave up her old dieting and began to eat large quantities of food. Plum began getting into violent confrontations with men who were rude about her appearance and started stealing lingerie from a popular store. She also began mailing copies of feminist books to Kitty’s readers.

In the news, it was revealed that a soldier named Soledad Ayala, the mother of Luz, whose rapists had been killed, was the woman behind the Jennifer terrorist group. Soledad had previously been friends with Leeta.

On the day Plum was due to have her weight loss surgery she held a dinner party at Calliope House where everyone joined in burning the lingerie that Plum had stolen. Julia asked Plum to write an exposé of Austen Media and said that she needed money to help Leeta. Plum withdrew the twenty thousand dollars given to her by Verena and took it to the Austen Media offices where Julia was hiding Leeta. Plum gave Leeta the money and told Julia that she would write the book. Plum left the offices and began running down the street, feeling an immense sense of freedom.