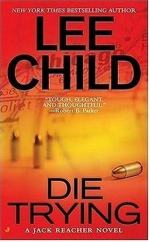 Lee Child
This Study Guide consists of approximately 40 pages of chapter summaries, quotes, character analysis, themes, and more - everything you need to sharpen your knowledge of Die Trying.

"Holly had been a stock analyst on Wall Street before applying to join the FBI. Nobody was clear why she'd made the change. She had some kind of exalted connections, and some kind of illustrious father, and the easy guess was she wanted to impress him somehow. Nobody knew for sure whether the old guy was impressed or not, but the feeling was he damn well ought to be." Chap. 5, p. 21

"Life was built on freak chances, however much people would like to pretend otherwise." Chap. 9, p. 44

"But he'd known guys with famous parents. The sons...

More summaries and resources for teaching or studying Die Trying.