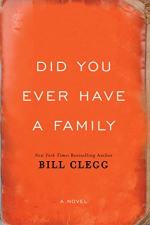 Related Topics
The End of the Day

Did You Ever Have a Family Summary & Study Guide

Bill Clegg
This Study Guide consists of approximately 43 pages of chapter summaries, quotes, character analysis, themes, and more - everything you need to sharpen your knowledge of Did You Ever Have a Family.

Did You Ever Have a Family Summary & Study Guide Description

Did You Ever Have a Family Summary & Study Guide includes comprehensive information and analysis to help you understand the book. This study guide contains the following sections:

This detailed literature summary also contains Quotes and a Free Quiz on Did You Ever Have a Family by Bill Clegg.

Bill Clegg’s Did You Ever Have a Family opens with the perspective of Silas, a pot-smoking teen, who hears sirens blaring on the day after he did yard work for Luke, his boss, in Wells, Connecticut. Luke’s older girlfriend, June, expects her yard to be used for her daughter’s wedding, but the stove in the house explodes early in the morning. June, sleeping outside, is unharmed, but her daughter Lolly, her would-be son-in-law Will, her ex-husband Adam, and her boyfriend Luke all die in the explosion. June spends the rest of the novel in a haze of despair trying to retrace her daughter’s steps in an attempt to connect with Lolly after her death.

Clegg switches his novel’s perspectives primarily among June and Lydia, the mother of Luke, but includes almost his entire cast as narrators. Consequently, the story leaps from diverse situations featuring differing narratives in an attempt to piece together the events and repercussions of the explosion. Beginning with Silas, the teenager leaves his bong in June’s shed on the day that he worked on the yard at June’s house. Terrified of being caught, he creeps back to June’s house that night to find Luke and her arguing in the kitchen about marriage. Luke wants to marry her, but June says that Luke is the type of person that someone like her hooks up with after marriage. Luke storms off while June prepares tea on the stove and June quickly followed him. Silas hears a loud clicking coming from the machine, but is terrified to be caught. He runs to the shed, collects his bong, then, on a whim, fiddles with the stove until the clicking stops.

June leaves Wells to stay at her friend Maxine’s cottage in Litchfield County, Connecticut. After a time of recuperation there, she gets in her car and travels west towards Washington State. All the while, she reads about and visits the places that Lolly mentioned in her infrequent letters to her mother. June visits national parks, hotels, and even gas stations about which Lolly wrote in an attempt to reconnect with some idea of her daughter. Finally, June winds up in the Moonstone Inn in Moclips, Washington State. June stays there for the majority of the novel while the kindly cleaner named Cissy brings her soup and tries to nurse June back to health. June wanders the beach and thinks of how she refused Luke’s proposals of marriage. The night of Lolly’s wedding, she finally resolved to say yes to his proposal. Tragically, he died that very day.

Lydia is little better off than June. Lydia, a beautiful and curvaceous woman, was always the center of attention in high school. Boys leered at her and girls spread nasty rumors about her. To protect herself, she began dating Earl Morey, a town bully who made her laugh. Earl’s protective sphere saved her from the worst of the gossips, but, when they married soon after high school, he began beating her each night after drinking himself into a stupor. Lydia, who cleaned the local motel during the day, had an affair with George, a black man from the south whose son was recovering from a drug overdose in Wells. George left the next day and Lydia became pregnant with her son Luke. When Earl saw that the boy was clearly not his own, he left Lydia who then continued to work and support herself and Luke who became an all-star swimming athlete in high school. Lydia eventually met Rex, a drug dealer who was kind to Lydia. Rex used Luke’s car to traffic large amounts of cocaine. The police arrested Rex who then blamed Luke and even convinced Lydia to testify against her son. Lydia and Luke spent years estranged until June convinced him to make amends with his mother. She lost Luke when June lost the rest of her family as well.

Lydia eventually finds her way to the Moonstone Inn and stays with June after Silas confesses his role in the stove’s explosion. Each character can finally begin to heal after their losses because there are no more lies or secrets to keep them from the truth of the incident.

More summaries and resources for teaching or studying Did You Ever Have a Family.

Did You Ever Have a Family from BookRags. (c)2022 BookRags, Inc. All rights reserved.