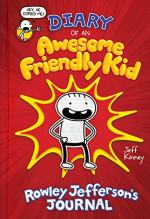 Jeff Kinney
This Study Guide consists of approximately 38 pages of chapter summaries, quotes, character analysis, themes, and more - everything you need to sharpen your knowledge of Diary of an Awesome Friendly Kid.

This detailed literature summary also contains Quotes and a Free Quiz on Diary of an Awesome Friendly Kid by Jeff Kinney.

Jeff Kinney's Diary of an Awesome Friendly Kid is written in the form of Rowley Jefferson's journal. Rowley immediately writes that his best friend is Greg Heffley and that they live in the same neighborhood. Rowley met Greg soon after he moved to this town. They became friends right away. While their friendship is not always smooth, Rowley seems to have no doubt that they are and will remain best friends.

When Rowley reveals to Greg that he has begun a diary of his own, Greg is angry. He has written several journals and accuses Rowley of copying him. After some conversation, Greg says that his journals are autobiographies and that Rowley should write about Greg's life, making his journal Greg's first biography. Rowley immediately takes on that task, and he opens the journal with the limited information he has about Greg's early years. He then notes that a good biography includes a chapter about accomplishments, but Greg is just a kid who has not accomplished much yet. Rowley leaves a page open to be filled in later.

Rowley writes about his own life. His father does not like Greg because of Greg's pranks which include throwing eggs at Mr. Jefferson's car. When Greg's pranks go too far, he is no longer allowed at Rowley's house. Greg has an older brother who is part of a band. Some of the band's songs include curse words. Rowley is not allowed to go to Greg's house when his brother's band is practicing. Despite the obstacles, the boys spend some time together.

Rowley has never spent a night away from home until he has a sleepover at Greg's house. Greg tells a scary story, and his brother frightens them both. Rowley wets his pants and has to go home. When his parents go away for a weekend, Rowley has a two-night sleepover. However, he and Greg spend most of their time bickering so that Greg's parents become repeatedly involved.

When Rowley is studying for an important math test, Greg decides to be his study partner. Instead of studying, Greg spends the entire study time distracting Rowley. He then copies all of Rowley's test answers and they both get in trouble. While it may seem Greg is never a good friend, he does stand up for Rowley when a new teacher gives everyone a C. Greg's interference results in Rowley getting a "B." As the novel comes to an end, Rowley and Greg have yet another argument that ends with Rowley shoving Greg into a puddle. Rowley remembers the words of Greg's mother, that “sometimes friends get on each other's nerves” (217). If that is true, Rowley knows that he and Greg are going to remain best friends.

More summaries and resources for teaching or studying Diary of an Awesome Friendly Kid.