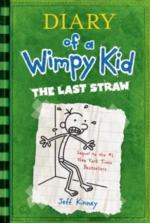 Diary of a Wimpy Kid: The Last Straw Summary & Study Guide includes comprehensive information and analysis to help you understand the book. This study guide contains the following sections:

This detailed literature summary also contains Quotes and a Free Quiz on Diary of a Wimpy Kid: The Last Straw by Jeff Kinney.

Diary of a Wimpy Kid: The Last Straw by Jeff Kinney is the third book in the series for young readers. The diary opens with an entry dated for January. Since it is New Years, Greg figures that people should be creating resolutions lists. Since he can’t think of anything that he needs to resolve for himself, he determines to help everyone else stick to or construct their own resolutions. Despite his best efforts, however, Rodrick, his older brother, refuses to make any changes (much to Greg’s disappointment).

The reader meets Lenwood Heath, the neighborhood vandal, whom Greg’s father detests. Greg shares that his father has called the police department fifty times over the last few years to report Lenwood. Finally, the entire situation is resolved when Greg learns that Lenwood is being sent to a military school. Greg’s father decides that both Greg and Rodrick are out of shape and aren’t measuring up to other kids in the neighborhood. Greg suspects that nothing good can come of this conclusion.

The next month is not much better as Greg’s junk food snacks have failed to make an appearance in his lunch sack for many days. When he complains to his mother, she tells him that she has a set number of snacks to pack inside lunches. When they are all gone, they are all gone until the next grocery day. She insinuates that Greg has been sneaking into the laundry room and eating them, but Greg knows that it’s most likely Rodrick.

Meanwhile, grade cards come out. Greg is not fast enough to get to the mailbox before his mother. She looks in horror at his report card to see that Greg is failing nearly every subject. Greg tells the reader that he is so tired from walking to and from school each day that he takes a long nap after school. Then, it’s time for dinner. After dinner, there are great TV programs to watch.

The next day Greg falls asleep in class and is sent to detention where a bully, named Leon, torments him. However, Greg seizes upon the chance to make it look as if Leon has smacked him on the back of the head, and Leon gets several more days of detention. Meanwhile, when Greg returns home he learns that his mother has finally gone to the grocery store and restocked the snacks in the laundry room. Greg knows that it is just a matter of time before the real thief comes down to steal the snacks. Greg hides in some laundry in the hamper and waits. He falls asleep while waiting but is wakened by the sound of crinkling paper. When he springs out of the basket, he is shocked to see that the thief is his father.

Valentine’s Day and the big dance arrive, and Greg is certain that this will be the perfect time to make his move on Holly Hills. However, when he gets up the nerve to go speak to her, Fregley, a nerdy kid that lives in Greg’s neighborhood ruins his chance.

Greg’s father has finally come to the conclusion that his children don’t measure up and as a result he’s taken it upon himself to enroll Rodrick in an SAT course and Greg on a soccer team. Greg is less than thrilled. Mr. Litch is Greg’s coach. For most of the first games, Greg and two other players warm the seats. But, when a new rule is passed, Greg is forced to play. It does not go well at all.

Greg’s father takes him to the movies where they run into Lenwood Heath, who doesn’t even look like himself any more. Lenwood talks to Greg’s father and tells him that he’s not only a star athlete at the military academy but that he’s pulling high grades, too. Greg’s father begins to get ideas, and his ideas worry Greg. When Greg hears his father talking to his mother about the benefits of military school, Greg tells his father that he would like to be in Boy Scouts instead of soccer. Greg’s father agrees.

Boy Scouts is better than soccer because Greg and Rowley are able to join the easy troop. Nearly anything the boys do, regardless of skill or proficiency, they receive a badge. Greg’s father is finally somewhat proud of him, and Greg is encouraged. He asks his father if he would like to go on a father son camping trip so that Greg can show him all that he’s learned in scouts. Greg’s father agrees, but Greg’s mother insists that they also take Rodrick.

The camping trip does not happen because it rains. All three end up staying in a hotel for the weekend. While there, Rodrick tricks Greg into coming to the door. Greg, who is only wearing his underwear, is shoved out into the hallway. Rodrick locks the door. Greg hides by the vending machines because he knows that his father will eventually go there for junk food. When his father finds him there, Greg can tell that his father is disappointed in him.

June rolls around, and Greg watches as everyone talks about how wonderful their summer is going to be. Greg knows that his is going to be horrible because military school begins in the summer. To top things off, he has to use one of his last few days of freedom to go to their neighbor’s party. Greg’s dad has been ducking them for a while; but, he doesn’t get out of it this time. He tells Greg that he will owe him a massive favor if he can come up with a way to go home early.

At the party that evening, Greg wracks his brain trying to think of things to free himself and his father from the embarrassment of party games. As he’s thinking about it, he views Manny, who has made his way over to the gift table and has opened one of the gifts. Greg watches in horror as the gift Manny has pulled out of the box is none other than a blue blanket like the one that Manny was made to give up. Greg knows that things are going to become complicated really soon. He attempts to get the blanket away, but Manny throws it over the railing. Greg tries to reach it, climbs out on a limb, then ends up, upside down, with his pants pulled down to his ankles. Greg’s father helps him get down and thanks him all the way home. The next day Greg’s father tells him that he doesn’t have to go to military school after all.

Diary of a Wimpy Kid: The Last Straw from BookRags. (c)2022 BookRags, Inc. All rights reserved.