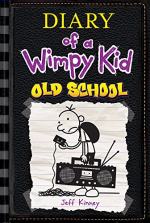 This detailed literature summary also contains Quotes and a Free Quiz on Diary of a Wimpy Kid: Old School by Jeff Kinney.

“Diary of a Wimpy Kid: Old School” is a young adult novel by Jeff Kinney which follows the misadventures of middle-schooler Greg Heffley as he attempts both to deal with his Grandpa’s moving in, and dealing without modern comforts while attending Hardscrabble Farm. When the novel begins, Greg’s mom, Susan, is worried her family is too obsessed with technology. She wants her family to unplug and spend time with one another. At the same time, Greg learns that Grandpa will be moving in for an unknown amount of time. While Greg and his dad, Frank, are concerned about this, Susan is delighted to have three generations under one roof.

Greg’s mom manages to get the issue of unplugging before the Mayor and City Council by way of a petition. The elected leaders then vote to voluntarily unplug for an entire weekend. A chief part of unplugging will be volunteerism, in which people can come and help clean up the park. Greg gets roped into volunteering at the park as well. While there, he decides to take a break, but is joined by his older brother’s friend Billy Rotnick, a troublemaker doing community service. Billy has stolen girl scout cookies, which Greg doesn’t like at all. Susan and all of the other adults then show up, having tracked Greg through a GPS chip in his shoelace.

Frank becomes very strict with Greg, not wanting him to goof off and wanting Greg to become more independent. While Frank is away on a business trip, Greg accidentally drops the toothpaste cap down the bathroom sink drain, so he disassembles the pipe to get it back. He causes a huge flood which in turn stains the kitchen ceiling downstairs. Grandpa volunteers to bring Greg to the hardware store to buy stainblocker paint, but Greg then remembers his grandfather doesn’t have a license anymore. The car runs out of gas on the highway, during which time Grandpa goes to get gas, leaving Greg with the car. Greg sees Billy and other community service teens cleaning the highway, so he ducks down and hides. When they pass by, Greg pulls himself out of hiding by grabbing the stick shift. As a result, the car rolls and gets stuck in a ditch.

Hoping to avoid his father’s wrath, Greg chooses to spend the week at Hardscrabble Farms with his classmates and best friend, Rowley, a trip which Greg has been trying to avoid at all costs. There, Greg is subjected to living without junk food, modern technology, and must live and do chores the way kids did a hundred years ago. Greg comes to appreciate the present more and to respect the kids who do such work, but it doesn’t make the trip any more enjoyable for Greg. Greg is even more annoyed to have Mr. Jefferson, cabin chaperone and father of his best friend, Rowley, for a bunkmate. But when Mr. Jefferson and Rowley are both exposed to poison ivy, they must both go home early. Greg and his fellow cabinmates do their best to get along, but fear the legend of Silas Scratch, a crazed farmer who used to own Hardscrabble.

Greg’s father is called in as an emergency chaperone. Rather than helping the boys get ready for their last night which must be spent outdoors, he adds to the legend of Silas, telling the boys to avoid his shack in the woods. That night, while collecting firewood, Greg comes across the shack. Looking inside the building, he discovers a modern maintenance shed and modern bathroom and shower. He also discovers his father inside, having just showered. Frank explains he attended Hardscrabble when he was Greg’s age, and that back then, bathrooms were horrible. When Frank and his friends discovered the shed, Frank made the shed look scary and invented the legend of Silas to keep kids away. Greg is very impressed with his father’s scheming. As the week ends, Greg drives home with his father, holding up a sign for the incoming kids that says “Beware of Silas Scratch”.

More summaries and resources for teaching or studying Diary of a Wimpy Kid: Old School.