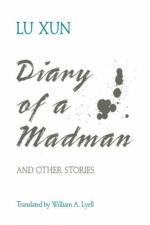 Diary of a Madman and Other Stories Summary & Study Guide

Lu Xun
This Study Guide consists of approximately 39 pages of chapter summaries, quotes, character analysis, themes, and more - everything you need to sharpen your knowledge of Diary of a Madman and Other Stories.

Diary of a Madman and Other Stories Summary & Study Guide Description

Diary of a Madman and Other Stories Summary & Study Guide includes comprehensive information and analysis to help you understand the book. This study guide contains the following sections:

This detailed literature summary also contains Topics for Discussion on Diary of a Madman and Other Stories by Lu Xun.

Diary of a Madman and Other Stories is a book of Xun Lu's short stories. Although some locations and characters cross over from one story to another, each story's plot is unique. What these stories do have in common is that they all take place in China in the early twentieth century and reflect Chinese culture and the norms of the day. The various plots show the relationships between various characters and how they deal with daily struggles and the politics of the day.

Through these plots, Lu Xun reveals his own beliefs and the beliefs of his friends regarding Chinese tradition, politics, and Chinese history. Through humor and the actions of his characters, Lu Xun shows himself to be a man that once fought for his strong beliefs and has now chosen to take to the sidelines, as the title of one of the sections and the introduction clearly reveal. He still has views regarding his country and the events that take place around him, but he is no longer interested in taking a strong stand for these beliefs. Instead, he chooses to write prose and often satire that show how he feels about his culture's past, present, and future. This suggestion by Lu Xun that he no longer has the will to fight for his beliefs may or may not be believed, for he was known to write in a pessimistic manner to make sure his readers did not become complacent. His writings also show how those with whom Lu Xun is close feel about their homeland.

Through these stories, it is revealed that Lu Xun and his friends scoff at much of Chinese culture and do not see beyond past and current Chinese leaders. He frequently pokes fun at these Chinese leaders as well as Chinese literature and culture as a whole. The traditionalists in this story are frequently portrayed as fools, while non-traditionalists are viewed as loners who are misunderstood and mocked. It is clear which type of person Lu Xun was or at least wanted to be. This also makes it clear why he tired of fighting for a new China, one whose natives loved one another and lived honest lives. His own personal struggles are clearly seen in the lives of many of the characters in these short stories.

More summaries and resources for teaching or studying Diary of a Madman and Other Stories.

Diary of a Madman and Other Stories from BookRags. (c)2022 BookRags, Inc. All rights reserved.