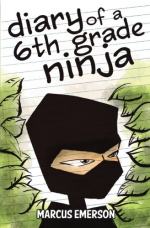 Chase Cooper is the 11-year-old narrator of the novel, and the cousin of Zoe. A brand new sixth grader at Buchanan School after Chase has moved with his family across town, Chase is not looking forward to the new school year. He is happy, at least, to know Zoe.

When Chase and Zoe discover that Buchanan has a ninja clan, Chase wants to join immediately while Zoe agrees to join out of kindness to Chase. When the ninjas require Chase and Zoe to steal just for the fun of it, Zoe quits. Chase betrays Zoe by refusing to quit because he is too caught up in the appeal of being a ninja.

However, when Chase is ordered to seek revenge against Zoe by framing her, Chase regains his sense of honor by standing up to the ninjas and refusing to hurt his cousin anymore. Chase has a moral...