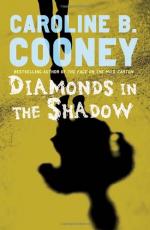 Caroline B. Cooney
This Study Guide consists of approximately 35 pages of chapter summaries, quotes, character analysis, themes, and more - everything you need to sharpen your knowledge of Diamonds in the Shadow.

Diamonds in the Shadow Summary & Study Guide includes comprehensive information and analysis to help you understand the book. This study guide contains the following sections:

This detailed literature summary also contains Topics for Discussion on Diamonds in the Shadow by Caroline B. Cooney.

Diamonds in the Shadow tells the story of the Amabo family, a refugee family moving away from war-torn Africa, and the secrets they carry to their new home that may endanger their loving host family in America.

At the opening of the novel, Jared Finch is outraged to hear that his parents have volunteered to house an African refugee family for three months. His sister Mopsy, on the other hand, is overjoyed. She prays the family will have a daughter so she can have a new best friend. Jared hates the idea of sharing his bedroom almost as much as he hates the idea of his sister's excitement. When the Amabo family arrives in New York City, Jared immediately notices that they act strangely toward one another, as if they've only met for the first time on the airplane. The family consists of strong-willed mother Celestine, double amputee father Andre, outspoken and bright-eyed son Mattu, and depressed, mute daughter Alake. When Mattu steps off the plane, he is carrying two cardboard boxes, which he says carry the ashes of his dead grandparents, although neither of his parents seems particularly concerned with the contents.

Moving the African family into a middle-class American neighborhood takes a lot of finesse. The refugees have never seen a microwave, drank hot chocolate, or slept in soft beds. Everything about American life astounds and amazes them. Although Jared is somewhat entertained by the refugees apparent naivety at home, he is mortified by the idea of bringing Mattu and Alake to school. Alake, who is either unwilling or unable to speak, can't do anything for herself. She doesn't feed herself, doesn't clothe herself, and doesn't bathe herself. She's like a walking zombie, and Jared can't understand why her parents don't do more to help her. It doesn't take long for Jared to start forming theories as to who the Amabo family really is, if they even are a true family. When Jared starts nosing around in Mattu's belongings, he discovers that the cardboard boxes don't actually hold ashes, they hold uncut blood diamonds.

The Finch family doesn't know is that the Amabo family didn't travel to America alone. They were followed by a fifth refugee, a dangerous warlord named Victor. In the New York airport, Victor was separated from the Amabo family and sent on a separate plane to Texas. There, he immediately begins his work to track the family down and take back what is his: the blood diamonds. As the novel progresses, the truth is revealed: Victor needed to transport blood diamonds to America, and when the real Amabo family refused to comply with his demands, he killed them and found other refugees, desperate to leave Africa to take their place. To avoid being murdered, this hodgepodge family of misfits had to pretend to be the Amabos and transport Victor's diamonds. Now that they are in America, the refugees thought they had escaped their captor, but they were wrong.

Just when the Amabos begin to let their guard down, to believe that they are true and free Americans, Victor returns to take back what it is his, and he doesn't care who he has to kill to get it. Taking Mopsy as his hostage, Victor demands the return of his diamonds. Alake lures Victor out to the frozen sea and then tackles him into the water, sacrificing herself for the greater good. Jared, who has learned to love the refugees as part of his family, dives in to save her. In the end, Alake is spared and fully welcomed into the Amabo family. Victor dies in the icy water, finally giving the Amabos their freedom.

More summaries and resources for teaching or studying Diamonds in the Shadow.

Diamonds in the Shadow from BookRags. (c)2022 BookRags, Inc. All rights reserved.