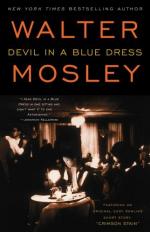 Walter Mosley
This Study Guide consists of approximately 37 pages of chapter summaries, quotes, character analysis, themes, and more - everything you need to sharpen your knowledge of Devil in a Blue Dress.

Devil in a Blue Dress Mosley exInplores racial tensions and cultural history by means of a plot set in Los Angeles of 1948. The narrator is the hard-boiled detective character Easy Rawlins, an African American veteran of World War II, currently out of work.

Like many of the characters who frequent the bars and other seedy venues of the story, Easy had left the segregated South to find work in California, but found disillusionment instead.

"Life was still hard in L. A. and if you worked every day you still found yourself on the bottom." White workers get better treatment "because they didn't come from a place where men were always called boys."

More summaries and resources for teaching or studying Devil in a Blue Dress.

Devil in a Blue Dress from BookRags. (c)2022 BookRags, Inc. All rights reserved.