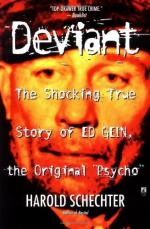 Harold Schechter
This Study Guide consists of approximately 28 pages of chapter summaries, quotes, character analysis, themes, and more - everything you need to sharpen your knowledge of Deviant.

The town where Ed Gein performed his murders and grave robbing.

Where George Gein lived with his parents until their deaths.

The address of the small meat and grocery business owned by George and Augusta Gein though Augusta claimed its ownership solely for her own.

The room built onto the side of Ed Gein's house that is where Bernice Worden's body is discovered.

Where Ed Gein is held immediately after his arrest. It's noted that Sheriff Schley and his family live at the front of the jail.

Owned by Ray Goult, this is where Bernice Worden's body it taken for autopsy.

The county in which the murder of Bernice Worden takes place.

Where Ed Gein is sent for a mental evaluation and where he is held both prior...