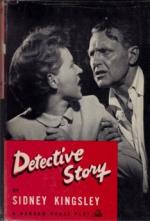 Detective Lou Brody has been McLeod's partner on the police force for thirteen years. Brody's son, Michael, served in the navy during World War II and was killed when his ship was sunk in the Pacific Ocean. Brody is particularly sympathetic to Arthur because Arthur also served in the navy during the war. Brody feels that if his son had lived, he would have had problems adjusting to life after the war similar to those that Arthur has had. Brody pleads with McLeod to be understanding about Arthur's troubles and to give him another chance instead of pressing criminal charges against him, but McLeod is unmoved and refuses to give Arthur a break. As McLeod is dying, he tells Brody to rake the handcuffs off Arthur and let him go free, which Brody does.

Callahan is one of the detectives in the precinct...