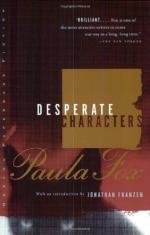 Paula Fox
This Study Guide consists of approximately 28 pages of chapter summaries, quotes, character analysis, themes, and more - everything you need to sharpen your knowledge of Desperate Characters.

This detailed literature summary also contains Topics for Discussion and a Free Quiz on Desperate Characters by Paula Fox.

Desperate Characters is a story about the desperation in the lives and marriage of Sophie and Otto Bentwood. They are an affluent, middle-aged couple of German descent that live in New York, in Brooklyn. Otto is a wealthy and competent attorney, while Sophie stays at home. The story focuses primarily on Sophie, and only Sophie's thoughts are revealed to us. The story begins with Sophie receiving a cat bite from a stray cat, and the wound she receives becomes infected and painful. Sophie refuses to have it treated and the wound becomes worse as she ignores it. The wound is symbolic of the growing desperation in her life, her refusal to face her problems and wrest meaning out of a seemingly meaningless and purposeless life. Sophie's major conflict is not with the cat, however, but with her marriage with Otto, which initially appears to be falling apart. Sophie has had an affair which she has concealed from Otto, which he never noticed. This indicates to Sophie that the marriage was already over, for Otto is preoccupied throughout the book with the falling out he has had with his lawyer partner, Charlie Russel. Otto is a reserved, angry and serious man, whereas Charlie is emotional, melodramatic and unserious, and so their falling out occurs over personality differences. Otto regrets the falling out and complains about it and Charlie attempts at various points to speak to Otto, to try to patch things up, but Otto considers these attempts disingenuous.

Otto and Sophie's relationship is often tense. They avoid fighting by ignoring it and remain preoccupied with others things, Otto with work and Sophie with friends, an affair and alcohol. But this is not a sustainable relationship. It becomes clear in the book that the marriage will either die or revive. The festering cat bite is symbolic of this unsustainable state of their relationship: either the wound must be treated, which will be painful, or Sophie will die, which will be worse. Sophie refuses to make a decision either way - over the cat bite and the marriage - until the final few chapters. She eventually decides to go to the hospital and have her hand treated. The treatment and other related events bond Otto and Sophie again. Their conflict reaches a head when they catch the (presumably) rabid cat that bit her. She doesn't want the cat to be destroyed, as she considers its potential death her fault. This is Sophie's last attempt to hold onto her problems and wallow in self-pity rather than face up to the hard task of healing her life and marriage. When Charlie finally calls Otto to talk to him and Otto refuses to speak to him the last time, their relationship seems healed. Both have faced their problems and the book ends with an embrace.

More summaries and resources for teaching or studying Desperate Characters.