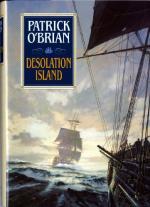 Patrick O'Brian
This Study Guide consists of approximately 41 pages of chapter summaries, quotes, character analysis, themes, and more - everything you need to sharpen your knowledge of Desolation Island.

This detailed literature summary also contains Topics for Discussion and a Free Quiz on Desolation Island by Patrick O'Brian.

Captain Jack Aubrey, c. 1809, takes command of HMS Leopard, a fourth-rate ship-of-the-line with a tarnished history. He sets sail for Botany Bay, Australia, for the dual purpose of transporting criminals to the penal colony and thereafter to recover the infamous governor William Bligh and escort him home to England. In the event, Aubrey accomplishes neither. Leopard is pursued by a Dutch opponent and, subsequent to victory, crashes into a submerged iceberg. Half of the crew deserts while Aubrey and the faithful struggle to make landfall on Desolation Island where repairs are made as Stephen Maturin intrigues with an American spy.

The novel, fifth in a series of twenty novels, opens ashore with Aubrey and Maturin discussing their respective futures. Aubrey is a hopeless boob ashore and, flush with a large and recent windfall, pursues several activities seemingly designed to dissipate wealth. Meanwhile Maturin pursues Diana Villiers, his unrequited love. As usual, Villiers absconds with another man, leaving Maturin to pay the bills. Maturin learns that Villiers has been compromised by her association with Louisa Wogan, a captured American spy. Upon the request of the intelligence service, Maturin agrees to accompany Wogan on her voyage to Botany Bay; he will pose as the ship's surgeon and seek to gain whatever intelligence advantage he can. Happily for the narrative construction, Wogan is to be transported aboard HMS Leopard, the very ship to which Aubrey has been appointed.

Aubrey takes command and leads Leopard south through stormy and then calm seas. Near the equator the ship enters the doldrums and drifts about for weeks in the oppressive heat. At this inopportune moment gaol fever breaks out amidst the prisoners and rapidly spreads to the crew. The fever is deadly and results in daily burials. The much reduced crew eventually recovers, the doldrums are transited, and the voyage continues after a brief stop at Brazil to discharge convalescents. Leopard enters the southern seas and encounters a hostile Dutch warship, the Waakzaamheid. Hopelessly outclassed, Leopard runs for safety and is pushed further and further south by the relentless pursuer. Eventually in a gale the ships close and a running fight is joined. After hours, Waakzaamheid is dismasted, broaches to, and is lost in the heavy seas. Aubrey is seriously wounded in the encounter and Leopard is far to the south—and in dangerous waters.

Leopard briefly resumes her voyage before running onto underwater ice. Taking on water at a fearful rate, Leopard is deemed lost by many of the crew who desert into the ship's boats. Aubrey and his loyal shipmates remain behind and manage to save the ship long enough to reach Desolation Island, where she mostly is repaired. There, Leopard meets an American whaler. In exchange for Maturin's medical care the Americans allow Leopard to use her forge and complete her refit. Meanwhile Maturin arranges false information to fall into the hands of Wogan and surreptitiously arranges her escape to the American vessel. Carrying a poison pill, Wogan flees as Leopard sets out to sea to complete her troubled voyage.

More summaries and resources for teaching or studying Desolation Island.