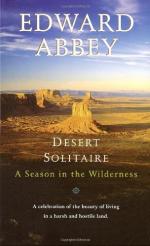 Abbey finishes his six-month stay in the desert and his job with the national park system. He had planned a farewell ceremony, but bad weather cuts it short. He leaves the Arches quickly to catch a flight to Denver, where he will take another flight to New York City, his winter home. He looks forward to again being in the city environment with all its humanity.

He parks his truck at a friend's house and prepares it for the winter. All flights have been cancelled due to the weather, but a new park ranger offers to drive him to a train station 30 miles away. Abbey accepts, and during the drive, he has a strong urge not to leave the desert. He does leave, wondering if he will return.

A thought comforts him. The desert will...

(read more from the Chapter 18 Bedrock and Paradox Summary)