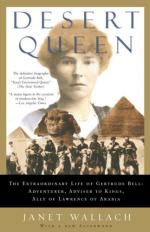 Janet Wallach
This Study Guide consists of approximately 28 pages of chapter summaries, quotes, character analysis, themes, and more - everything you need to sharpen your knowledge of Desert Queen.

This detailed literature summary also contains Topics for Discussion and a Free Quiz on Desert Queen: The Extraordinary Life of Gertrude Bell, Adventurer, Adviser to Kings, Ally of Lawrence of Arabia by Janet Wallach.

Desert Queen: The Extraordinary Life of Gertrude Bell: Adventurer, Adviser to Kings, Ally of Lawrence of Arabia is the life story of noted Englishwoman, Gertrude Bell. Gertrude is born in Washington Hall, County Durham, England, on July 14, 1868, to extremely wealthy parents, Hugh and Mary Bell. The Bell family business of iron and coal manufacturing provides vast opportunities to Gertrude throughout her life.

Tragedy will mark Gertrude's otherwise privileged life with the death of her mother when Gertrude is only three-years-old. Gertrude forms an extraordinarily close bond with her father which will continue until her death. When Mr. Bell remarries, Gertrude forms a cautious and polite relationship with her stepmother but it drastically pales in comparison to the feelings Gertrude has for her father. Gertrude has one brother, Maurice, a stepbrother, Hugo, and two stepsisters, Molly and Elsa.

Gertrude is an exceedingly gifted child and goes away to the all-girl Queen's College in London at the age of seventeen. Gertrude loves her newfound independence but must return home for three years of social seasons with the objective of securing a proper husband. When a suitable match is not secured, Gertrude goes to Oxford University where she excels in her subjects, especially history. In the hopes of finding a husband for Gertrude, the family sends her to a relative in Romania for another social season. Gertrude does fall in love with a young man but her father will not consent to the marriage so Gertrude takes control of her life and decides to travel the world to explore.

On a trip to Jerusalem, Gertrude falls in love with the East and delves head first into the study of the Arabic language which allows her to travel freely throughout the region. Gertrude brazenly launches solitary treks across the Arabian Desert encountering raiding Bedouin tribes as well as sheiks complete with harems. Gertrude's life will take a pattern of extended travel punctuated by trips home to England but she always longs to return to the desert which she feels is her only escape from the binds of Victorian England.

Throughout her life, Gertrude will have a few significant romantic relationships but they all end tragically either through death or rejection so Gertrude remains married to her work of exploration. Eventually Gertrude is employed by the British government to aid their intelligence and map making efforts during World War I and Gertrude thrives in her new environment. For the first time in her life, Gertrude feels like a real "Person" because people value her contributions and her knowledge.

In her experiences in the East, Gertrude meets T.E. Lawrence, who will become known as Lawrence of Arabia, as well as Winston Churchill and other world dignitaries. Gertrude's greatest professional accomplishment is the crafting of the government of an independent Iraq complete with the installation of a carefully chosen king whose friendship and respect she secures. Unfortunately, when Gertrude's professional duties come to an end in her beloved Iraq, she feels that her life no longer has purpose and she commits suicide a few days shy of her fifty-eighth birthday.

More summaries and resources for teaching or studying Desert Queen: The Extraordinary Life of Gertrude Bell, Adventurer, Adviser to Kings, Ally of Lawrence of Arabia.