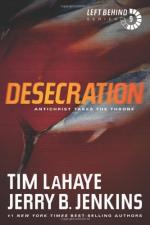 Tim LaHaye
This Study Guide consists of approximately 51 pages of chapter summaries, quotes, character analysis, themes, and more - everything you need to sharpen your knowledge of Desecration.

The novel "Desecration: Antichrist Takes the Throne" is the ninth book in the Left Behind series. The series tells a fictionalized story of the final days of the earth based on information given in the Christian Bible. This particular book focuses on the escape of the believers to the safety of Petra after the antichrist, Nicholae Carpathia, desecrates the temple and forces the people to worship him. Themes discussed in the novel include faith as well as the fulfillment of Biblical prophecy.

The action of this novel starts just after four members of the Global Community have faked their deaths in a jet crash so that they can work actively with the Tribulation Force. This group of Christians has been building an airstrip in the Negev desert to bring in supplies for the group after they lead the Christians in Jerusalem to the city of Petra, a place where God has promised the Christians will be safe from the antichrist.

Meanwhile, Carpathia is forcing the people to worship him and take a mark of loyalty to him. He is preparing to tour Solomon's Temple, which has been restored as a temple to Carpathia. As people begin getting the mark, they are also struck down with a plague of boils, a sickness that weakens Carpathia's forces. In addition, Orthodox Jews and Christians as well as those who are still undecided are offended by Carpathia's desecration of the temple when he both murders a man in the temple, then slaughters a pig in the Holy of Holies. Chaim, who has been chosen to lead the people out of Jerusalem, takes a stand against Carpathia and tells him that the only way his people will be cured of their boils is to let the people of Jerusalem go to Petra before he starts killing people for not taking the mark. Although Carpathia goes back on his promise to Chaim and sends out military forces against the Christians, God keeps these Christians safe.

Chloe, head of the Tribulation Force's commodity co-op, discovers a group of Christians living in Chicago who are willing to join with Chloe's group. David Hassid, a computer engineer and important part of the Tribulation Force, is killed by two stray GC troops as he waits for the Christians to begin arriving in Petra. Three Tribulation Force members are killed in an ambush during a rescue mission gone wrong in Greece. As the novel closes, Chloe and Hannah are sent to Greece to attempt to rescue George Sebastian who is kidnapped during the failed rescue mission. While all of the Israeli believers have been safely transported to Petra they are once again threatened as Carpathia's forces plan to demolish while Tsion, the spiritual mentor of the group, visits the city.

More summaries and resources for teaching or studying Desecration: Antichrist Takes the Throne.